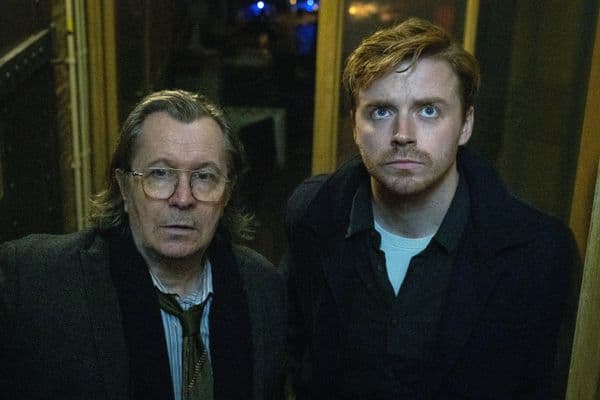 It’s about time we had a new twist on the conventional espionage drama. We know the ingredients from John Le Carré’s books and other material: blackmail, double agents and the ruthless pragmatism of spies who control other spies. Cynical double-dealings too, and the ambiguities of spying reflected in the ruins of a personal life for some protagonist. There has to be some mundane aspects as well, to underline that spying is never like a James Bond movie.

Slow Horses (streams Apple TV+ from Friday) is the new twist you’ve been waiting for. Based on the novel by Mick Herron, which itself is a variation on Le Carré’s world, it brings us one of the great dilapidated spies. That’s Jackson Lamb, a man so burnt-out, seedy and cynical he’s like a perambulating half-century of jaundiced espionage experience. And he’s played here, with exquisite relish, by Gary Oldman, in a performance that resonates with misanthropy and earned pessimism

The series opens with a long, terrific and edge-of-your seat scene in which River Cartwright (Jack Lowden), a young and ambitious MI5 agent, tries to stop a terrorist bombing at an airport. Things go awry and Cartwright ends up working at a warren of ramshackle offices called Slough House, where Lamb is the boss. It’s the place where MI5 sends screw-ups and failures, in the hopes they will quit in despair. It’s not physically far from the sleek HQ of the intelligence service operation, but it might as well be on another plant.

Or it could be hell, with Lamb reigning as a gone-to-seed Beelzebub. Slow Horses is about spying, and before the first episode ends there’s a hostage-taking that the main characters must tackle, but in essence this is a workplace drama filled with bitter humour. And the tumbledown setting is as much a character as any of the beaten-down spies. Those include several examples of hopeless males and two competent women, Sid (Olivia Cooke), a young woman whose failure isn’t revealed for a while, and the older Catherine (Saskia Reeves) who, we know, had a drinking problem. You can tell every actor here is reveling in the material that’s familiar, but given a new slant. Kristin Scott Thomas is icily brilliant as an MI5 boss and Jonathan Pryce, in his occasional appearances as him, is majestic as Cartwright’s grandfather, a grumpy retired agent.

The series is adapted by Will Smith (the English one) who wrote for veep and The Thick Of It, and it sees with splendidly tart dialogue. But for all that, it’s a curiously warm series. After all, it is about a motley crew of cast-offs looking for redemption. In the past decade we’ve had interesting twists on the espionage genre, with The Americans and Homelandbut Slow Horses (six episodes, two available now, and a second season already made) goes admirably in the direction of familiar Cold War motifs and adds a thrilling energy.

Also airing/streaming this weekend: The 64th Annual Grammy Awards (Sunday, CBS and Citytv, 8 pm) takes up a lot of time on Sunday. Postponed from January and this time live from Las Vegas, the performers include BTS, Oscar winner Billie Eilish, Carrie Underwood, Jon Batiste (who has the most nominations), J Balvin, Silk Sonic, John Legend, Brandi Carlile, HER, Lil Nas X and Olivia Rodrigo. Trevor Noah returns as host, and it was Noah’s online battle with Kanye West, or Ye, that led to the star being banned from the event, so expect some remarks about that. Drake simply withdrew his material this year.

See also  WandaVision: The Biggest Mistakes Every Main Character Made

Independent Lens: Writing with Fire (Sunday, PBS 11 pm) is an Oscar-nominated documentary about an all-women news service in India. They women have had a rough and dangerous road, and the doc is an intimate, on-the-ground portrayal of the outlet’s more experienced reporters and its newbies who are risking a lot to come on board. Everyone involved is aware of the hostility they face, and their energy and fortitude is astonishing.

Finally, take note that all four seasons of Casual have now arrived on Netflix, after previously being on Crave. It’s a gem of a brittle but sharp adult comedy-drama about life, love, family and friendship. Mainly it’s about figuring out that, if your parents screwed up, it’s up to you to make a better life. Executive-produced by Jason Reitman, it focuses on a bachelor brother (Tommy Dewey) and his newly divorced sister (Michaela Watkins), living under one roof again. All four seasons have eight 30-minute episodes of acerbic wit.