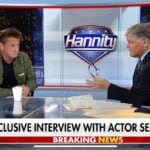 The US Constitution was all Joe Scarborough needed to vaporize Republicans’ latest attacks on Supreme Court nominee Ketanji Brown Jackson.

On Tuesday’s “Morning Joe,” hosts Scarborough and Mika Brzezinski unpacked the line of reasoning from Sen. Tom Cotton (R-Arkansas), who seemed to question Jackson’s fitness of her as a US Supreme Court nominee because she once “represented four terrorists as a public defender.”

“Joe” played the full clip of Cotton’s monologue from the Senate hearing:

“In every one of those cases [Jackson] claimed the terrorists had never had any affiliation with the Taliban or Al Queada,” Cotton said. “In every one of those cases she accused the Bush Administration and American soldiers of war crimes. One of her clients of her designed the prototype shoe bomb… another planned and executed a rocket attack on US forces in Afghanistan. A third was arrested on a raid on an Al Queada explosives training camp. Yet in every case she claimed they had nothing to do with terrorism…just goat herders who were picked up by marauding US troops.”

But it was Cotton’s final flourish that set off the “Joe” hosts.

“You know,” Cotton said ominously, “the last Judge Jackson [Robert H. Jackson, who served 1941-1954] left the Supreme Court to go to Nuremberg to prosecute the case against the Nazis. … This Judge Jackson might have gone there to defend them.”

“Well,” Scarborough said as the clip concluded, “that just made the ghost of Joe McCarthy blush.”

Scarborough didn’t have to dig deep to demonstrate the disingenuous nature of Cotton’s argument, noting that Jackson didn’t choose to defend those detainees — she was assigned them as a federal public defender, never went to Guantanamo Bay to meet them, and each was eventually released without conviction.

“That is the way that it works in our Constitutional Republic, folks,” Scarborough said. “If you don’t know that, guess what? You can be forgiven for that because you’re not a lawyer. But in the case of Tom Cotton, he has no excuses. He is twisting this so out of context. It is a wretched display for another Ivy League guy … acting stupid about what happens when you’re a public defender, when you’re assigned the case.”

And least anyone attempt to minimize that bit of missing context, “Morning Joe” noted that it’s a foundational piece of Republicans’ favorite polestar: the US Constitution.

“You know why you’re assigned those cases? Because the Constitution — which Republicans like Tom Cotton claim to defend,” Scarborough said. “He knows better. That’s what makes it so absolutely positively shameful.”