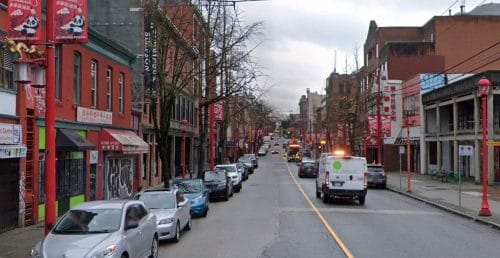 Vancouver’s historic Chinatown could finally receive some much-needed attention to the crime and public safety and disorder issues that are putting the district’s businesses and cultural organizations in immense distress.

However, the approval came with some amendments that would direct city staff to study and report back on the high fees and pricing rationale for pay parking in Chinatown compared to other areas of the city.

As well, city staff have been directed to develop a six-month pilot project to “mitigate barriers to visiting Chinatown by reducing parking meter fees in non-peak hours to encourage both visitation and curbside turnover.”

It is a far cry from De Genova’s original motion calling for a pilot project of free parking on Sundays to help attract customers to support struggling businesses, and to create added visible pedestrian traffic for improved public safety.

De Genova supported the motion after various amendments were made to it, but called it “watered down.”

Free parking has been one of the top requests from the various business and community groups heavily invested in Chinatown’s revitalization.

“I’m truly appreciative of the attention that is being drawn to support our community lately. Everybody knows what’s going on in Chinatown. There is a public perception that it’s unsafe, which it is. So you know, I’ll support any motion that will bring more people into the neighbourhood,” said Lorraine Lowe, the executive director of Dr. Sun Yat-Sen Classical Chinese Garden, which has been facing daily instances of vandalism, including cases that are clearly racially hate-motivated.

She said the cultural center sees more vandalism on quieter days of the weekend when there is typically less foot traffic, and that the use of CCTV cameras has allowed her organization to catch vandals in the act. Improved lighting throughout the district was also brought up as a possible measure to detect unwanted activity.

Lowe directly addressed concerns by previous public speakers who suggested free or lower cost parking should not be considered as an option for reasons that include climate change.

“They are not working and living in Chinatown, they do not see the horrors that we see everyday, so I do feel a bit slighted when people coming from other areas who don’t have the connection that we do with Chinatown tell us how Chinatown should be,” said Lowe, instead suggesting Chinatown could use any and all help that it can get to attract more foot traffic.

“I know, coming from a Chinese background, when you say free parking or free anything, we’re there!” she added.

City council also approved the motion’s components of directing city staff to explore and report back on how the growing state of deterioration — anti-Asian hate crimes, violent crime, property crime, vandalism, and theft — in Chinatown could have an impact on the municipal , provincial, and federal government’s ongoing application to seek a UNESCO World Heritage Site designation to help preserve one of the oldest and largest Chinatowns in North America. City staff are required to report back before the end of this year.

“Chinatown is a gem in our community, and we realize that maybe this could be a UNESCO World Heritage site. But then we should be treating our community with the same dignity and respect as UNESCO, but I don’t see that happening right now,” said De Genova, adding that “hate can’t wait, and we can’t make Chinatown wait another day.”

See also  What is the Marvel multiverse? 4 things you should know about comics

Lowe says the effort for the UNESCO designation is a great idea, but the current issues facing Chinatown are “like shoveling water,” emphasizing that “we need to look at a bigger picture right now, and see what needs to be done immediately.”

An amendment proposed by COPE councillor Swanson and supported by OneCity councillor Christine Boyle was sharply rejected and rebuked by other councillors.

Swanson’s failed amendment would have removed the specific detailed direction of asking city staff to work with “stakeholders, community organizations, the Chinatown Business Improvement Association, businesses and merchants in Chinatown, and the Vancouver Police Department” on addressing key areas in the district where violent crime, vandalism, property theft, and graffiti are most prevalent. City staff will report back on these findings before July 2022.

“I’ve spent a lot of time in Chinatown, and I think the fact that this strikes out some of the violent crime that happens. There is violence, there is bear spraying, there is a lot of theft that goes on… there are legitimate policing issues that need to be addressed, and I don’t think it’s entirely fair to folks who are concerned about it,” said Green Party councilor Pete Fry, who says he has heard impassioned testimonials of what the community experiences day-to-day.

“I’m not prepared to gaslight the community and say the violence doesn’t matter, and the property crime doesn’t matter. I don’t think it’s appropriate, so I won’t support this amendment.”

A Better City councilor Lisa Dominato added that the amendment as proposed “takes a whole group of people who are critical players in Chinatown.”

See also  Pixar: 5 Ways DreamWorks Is Its Main Rival (And 5 Ways It's Lighting)