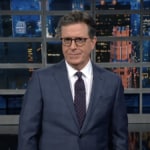 “Late Show” host Stephen Colbert had a few things to say in his Monday night monologue about the Florida department of education rejecting 54 math bookssome of them due to what the division said were references to critical race theory.

Here’s how Colbert ripped into the state department’s decision, which was supported by Gov. Ron DeSantis: “So why the war against arithmetic? Well, the Florida education department explained that reasons for rejecting textbooks included references to critical race theory, which the Florida legislature says includes theories that distort historical events. That explains the updated unit on division — a house divided against itself, hey, that’s two houses. Nice.”

Colbert also pointed out that the officials did not mention the rejected textbooks by name or cite portions of the books that did not meet their criteria, “but described the review process as transparent,” he said.

“I guess they also banned dictionaries, because that’s not what ‘transparent’ means,” Colbert joked.

The late night host then went on to turn accusations against Congressman Matt Gaetz, which the politician has deniedinto a faux Florida math test problem.

“And while the banned books remain a mystery, here at ‘The Late Show,’ we have received a copy of [this] newly-approved Florida math problem: Congressman Matt Gaetz and two friends have 10 ounces of cocaine. There are 12 people at the party, three of them under 18. What should he call it on the Venmo transaction?” Colbert said to laugh.

Watch the whole monologue above. 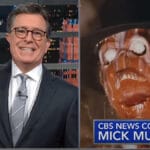