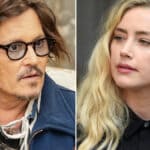 Johnny Depp was expected to take the stand Tuesday after the court takes an extended recess for lunch.

Wearing his shaggy hair slicked back and steadily chewing gum, the “Pirates” star sat in the plaintiff’s box while his personal physician testified that he never personally witnessed Depp taking drugs. That session concluded before noon, and the judge excused the jury until 2 pm Eastern.

Proceedings were expected to continue with Depp taking the witness stand.

Depp says ex-wife Amber Heard defamed him by claiming in a Washington Post op-ed to be a victim of domestic abuse. The actor is seeking $50 million in damages; Heard has counter-sued for $100 million.

Heard was also expected to take the stand during what could be a six-week trial in Fairfax, Virginia.

This story is developing, check back for updates …