NOTE: This story contains details some may find disturbing. Please read at your own discretion.

Johnny Depp took the stand in court Tuesday to testify against ex-wife Amber Heard, whom he has accused of ruining his reputation and career with false accusations of domestic violence.

In a slow and stilted tone, Depp began his testimony addressing how he wants the public to know the truth about what happened between the couple.

“I had to wait for my opportunity to address the charges, which were criminal charges. They just weren’t true.”

Speaking frequently of the impact of the case and its details have had on his children, Depp said he’s also suffered from a personal fall-from-grace.

“One day you’re Cinderella, so to speak, and then in 0.6 seconds you’re Quasimodo.”

The fully televised legal battle of the divorced couple has captured the attention of spectators around the globe, with both Heard, 35, and Depp, 58, claiming to be victims of violence. The initial court case began when Depp filed a $50-million defamation lawsuit over a Washington Post op-ed penned by Heard in late 2018 about domestic abuse.

Heard did not mention Depp by name in the article, though in court documents he alleges his reputation and career were still “devastated” as a result. 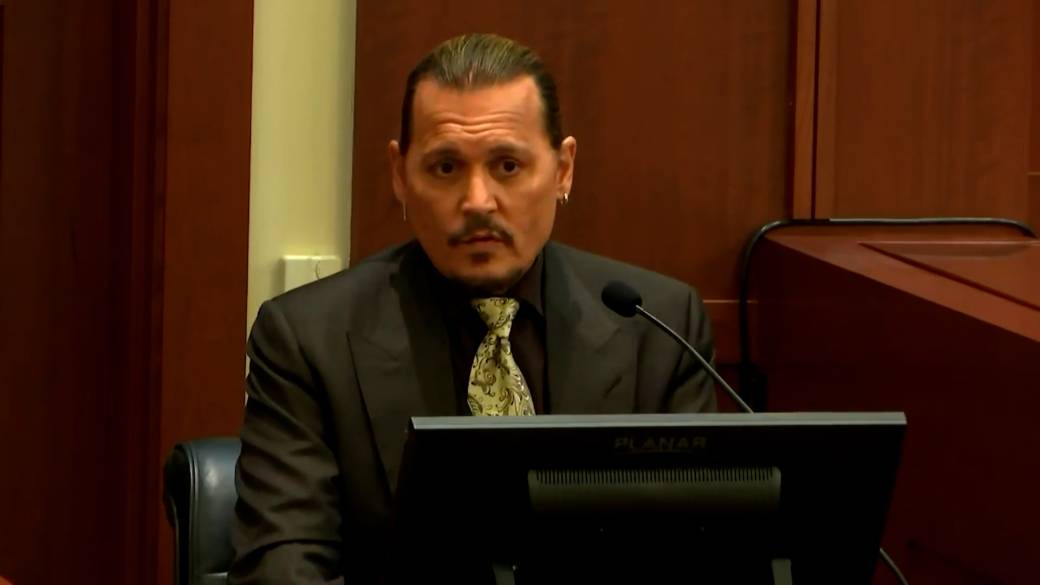 2:56
Johnny Depp takes stand in defamation trial against Amber Heard: ‘My goal is the truth’

Johnny Depp takes stand in defamation trial against Amber Heard: ‘My goal is the truth’

Day 5 of the trial in Fairfax County Circuit Court in Virginia saw the A-list actor take the stand.

When questioned about his childhood, Depp described in detail the abuse he and his siblings suffered at the hands of his mother, Betty Sue Palmer.

“My mother was quite unpredictable. She had the ability to be as cruel as anyone can be,” Depp shared.

Depp shared examples of his mother throwing ashtrays or beating her children with a high-heeled shoe.

“In our house we were never exposed to any type of safety or security. The only thing that one could do, really, was to stay out of the line of fire.”

And, although he said there were often fights between his mother and father, he said his father was never abusive.

Depp also detailed the early days of his relationship with Heard.

“In the beginning, from what I recall, she was as if she were too good to be true,” he said, adding that they shared similar musical and literary interests.

However, there were early warning signs that something might be off, said Depp.

He recalled how Heard would bring him a glass of wine and take of his shoes at the end of each day. One day, when he came home from work he took off his shoes himself and said Heard became “visibly shaken, upset, that I had broken her rules of routine.”

That was one of the first signs their relationship began to change, said Depp.

“Within a year, year-and-a-half, she had become another person, almost.”

Depp testified about his history of drug and alcohol use, which he claims began with his mother’s “nerve pills.”

“I wanted to calm down and I didn’t know how to so I’d bring my mom her nerve pills, walk away, and take one myself to escape feeling so much,” he said. “To escape the chaotic nature of what we were living through.”

However, Depp testified that the details Heard has shared about his alleged drug and alcohol addictions are “grossly embellished” and “plainly false.”

Depp said he’s “not some maniac who needs to be high or loaded all the time,” and described times of his life where he’s gone completely sober for months at a time. He said any substance used he was was involved it was not for a “party effect, but I’ve taken them to numb myself.”

He also said that he was addicted to an opiate similar to oxycontin, called roxycontin. He said it was prescribed to him for an injury he sustained while on the set of one of the Pirates of the Caribbean movies, and he was addicted to the painkillers for approximately five years.

The day concluded with Depp answering questions about the beginning of his relationship with Heard. He spoke about when they met on the set of The Rum Diaryand how they shared both an on-screen and off-screen kiss, despite each being in relationships.

He recalled their blossoming romance, saying that they often spent time with their friends and family.

“For a good year, year-and-a-half, she was wonderful. And then things started to…reveal themselves.”

Depp revisited the story he shared earlier in the day about Heard removing his boots, and also recalled Heard trying to control his bedtime, demanding that he go to bed at the same time as her.

Depp’s lawyers have already called on several witnesses, including friends, the couple’s therapist, and the doctor and nurse who claim they treated the Pirates of the Caribbean actor for substance abuse issues.

In opening statements delivered by the former spouses’ legal teams last week, Depp’s lawyers claim Heard is “choosing to lie about him for her own personal benefit.”

Heard’s lawyers argued the opposite, claiming freedom of speech allowed the Aquaman actor to pen the Washington Post op-ed.

Last week, Depp’s doctor and a nurse—who were tasked with treating Depp’s substance abuse issues—also testified about the hunt for the actor’s severed fingertip. Depp claims the injury occurred in 2015 when Heard allegedly threw a bottle at him.

“He said he found it in the kitchen area,” Kipper said, also claiming blood and broken glass were seen in the house.

Earlier in the day on Monday, Depp’s chief of security Sean Bett and sound technician and friend Keenan Wyatt testified, both claiming they have never seen Depp be abusive to anyone.

In November 2020, Depp lost a UK libel case against British tabloid The Sun, which called him a “wife-beater.” The court found Heard’s claims of him in the Washington Post article were “substantially true.” Depp’s request to appeal the decision was denied.

Franco and Musk were brought into the case when Depp accused both of having an affair with Heard. Both Franco and Musk are on Heard’s witness list. Bettany, who had several private and disturbing text messages with Depp read in court in 2020, will testify as part of Depp’s team.

Heard is countersuing for $100 million in damages. The claim will also be decided within this trial.

Court proceedings are expected to last about six weeks with a jury verdict determining if Heard defamed Depp at the trial’s end.