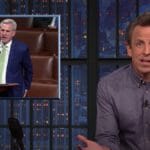 In a new “A Closer Look” with Seth Meyers on Monday’s “Late Night,” the host tackled Tucker Carlson highlighting, in a new Fox News special, testicle tanning. And Meyers thinks Carlson’s audience is probably going to embrace it wholeheartedly.

In Carlson’s new special, called “The End of Men,” one of the Fox News and Fox Nation host’s interview subjects touts the idea of ​​red light therapy, which includes testicle tanning. That’s the part that Carlson hones in on, noting that “half of the viewers” ​​probably consider it to be a “crazy” idea, but he adds that he’s open to it.

Of course, Meyers chuckled at the idea that Carlson’s viewers would consider testicle tanning an outlandish idea.

“I also like that Tucker says half of his viewers will think testicle tanning is crazy. I’m going to go out on a limb and say that if you’re tuning in to watch a Tucker Carlson special on Fox streaming service titled ‘The End of Men,’ you might be down to clown with just about anything,” Meyers joked.

“I would venture half his audience was saying ‘I have to try that’ and the other half was saying ‘Testicle tanning? Tell me something I don’t know. I expose my nuts to red light therapy every day. Sometimes I just drop ’em straight into the toaster and let ’em warm up for a few seconds. If you really wanna be an alpha man, you just gotta stick your entire junk in the microwave and put it on popcorn mode. That’s just when you’re advanced.’”

Meyers then went on to poke fun at how quickly Carlson and his guest arrived at the idea of ​​testicle tanning, calling out conservatives as a group.

“Also, even if there was some sort of massive global testosterone crisis, is it already time to resort to tanning your balls? Nothing is crazier than a conservative’s second idea,” Meyers said. “’I don’t trust vaccines, but I’ll eat some horse paste.’ Are there ever solutions somewhere between Plan A and the craziest s— you’ve ever heard?”

You can watch the full segment in the video here and above.