The Northman Red-Band Trailer: A NSFW Look at the Viking Movie 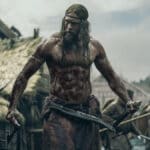 Just days before the film hits theaters, Focus Features has released a red-band trailer for the new Viking action-thriller “The Northman” that offers a no-holds-barred look at the R-rated revenge shenanigans that await moviegoers.

The film hails from “The Lighthouse” and “The Witch” writer/director Robert Eggers, and is a $90 million R-rated Viking movie. As if that wasn’t a selling point enough, this short red-band trailer offers a closer look at some of the film’s gorier scenes, with a blood-soaked Alexander Skarsgaard using all manner of ways to slice and dice his way through a small village.

The story is a simple one: Skarsgard is a young Viking prince seeking to avenge the murder of his father (played by Ethan Hawke).

This is the biggest film Eggers has ever made, and he has maintained recently that while the larger budget came with more notes from the studio, the finished version of the film is very much his director’s cut. “This is the film I wanted to make,” Eggers told The Guardian. “This is my director’s cut. The studio pressure made the film what I originally pitched to them, which was the most entertaining Robert Eggers movie I could make. Honestly, without their pressure, I couldn’t have done that. It’s hard for me to tell a story with a beginning, a middle and an end, for goodness’s sake.”

“The Northman” is racking up positive reviews (it’s at 88% on Rotten Tomatoes) and opens exclusively in theaters on April 22. Check out the red-band trailer in the player abovebut be warned it includes some R-rated violence.