The UCM and its uniforms, what are they hiding? 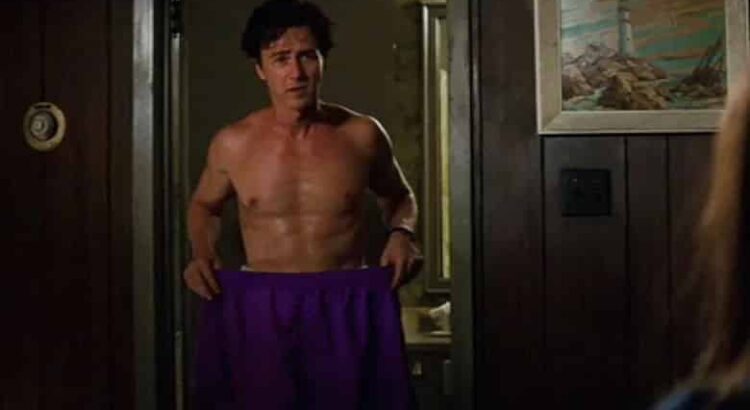 The UCM has been giving us audiovisual products regarding Marvel comics for more than ten years. After all, they are adaptations and obviously they are not always as faithful as they should be. Other times they are faithful. This fidelity has ensured that after many movies and series there have been characters that have been practically the same as the characters in the comics.

These adaptations have delighted the fans since they have basically been the ones who have been elucidating and dissecting many details. These easter eggs, as they are called in the English market, have been one of the biggest hobbies of the fans. Therefore, we have collected in this article the greatest details that we have seen over the years in their products.

The Hulk is one of the most iconic characters in all of Marvel and has always been a fan favorite. The voluptuous green body of him with his purple pants quickly penetrated the minds of the readers. His participation in the UCM began back in 2008 with the movie The incredible Hulkstarring Edward Norton.

Although it is not the best movie in the entire UCM (many times it has been listed as the worst movie in Marvel history), it is true that it was the first time we could see the green monster on the big screen.

We could see this purple pants for the first time in the comic The Incredible Hulk #4 Since the first three issues, the Hulk wore orange pants. If we see the movie, the character of Betty, played by Liv Tyler, throws purple pants at Bruce Banner, which are the original ones.

Ant-Man and the Wasp costumes

Ant-Man was a character introduced in the UCM in 2015. This curious character who had never had a great relevance within Marvel fell in love with many followers thanks to his humor. In its sequel, Ant-Man and the Wasp, He introduced himself to his partner, the Wasp who has “stayed” in the UCM.

These characters are obviously named for their relationship with insects and their main power is to change size at will. If we look at what their costumes are like, we can see that each of the costumes that these superheroes wear can be seen how they are designed so that each one has the head of the insect that it represents on the chest.

Something very curious is to see how these characters have blended in so well within the UCM with such precise details. Their hooves are also highly detailed making recognition of these insects quite easy. 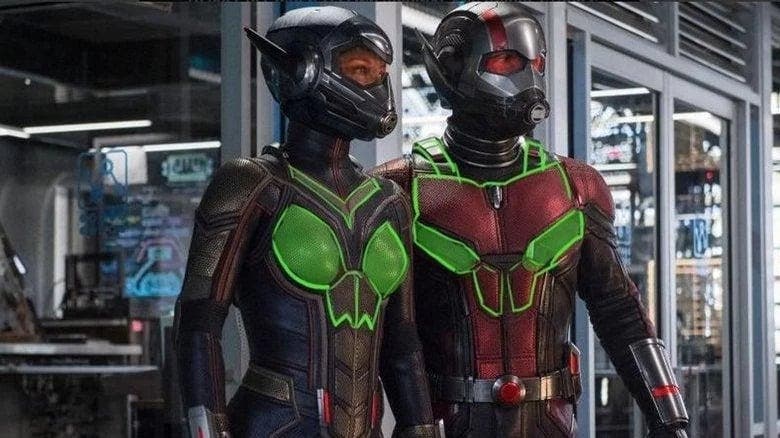 Marvel’s first Disney Plus series was Wandavision. The story of Wanda Maximoff and the Vision that fell in love with all the fans and gave us a preview of what the future of the UCM will be like. In the different chapters we could see the variations of clothing, depending on the time in which Wanda was, or rather, in which Wanda was included.

In the sixth chapter we can see how Halloween arrives in the series and the characters do not dress up, but have their own being since they do not need to hide in any way. We can see Wanda “disguised” in the uniform that she originally wears in the comics.

We also get to see his brother, Quicksilver, dressed just like in the original comics. We can also see the twin children of Wanda and Vision who dress the same as in the comics, maintaining the aesthetic that we could read when they were presented to us. 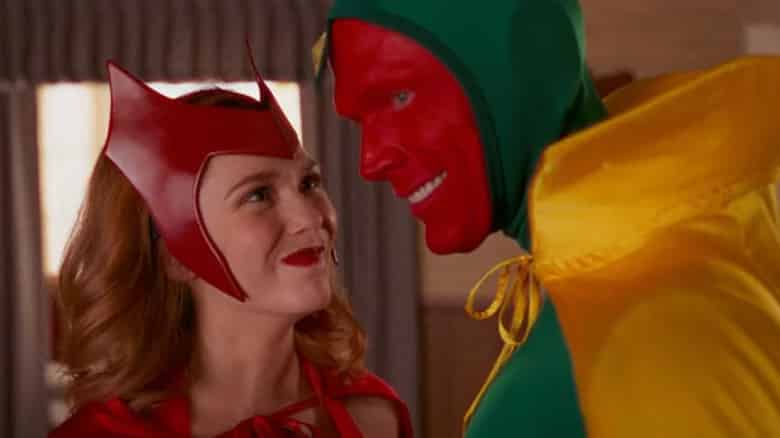 Captain Marvel and her fidelity to the comics

Not only the aforementioned characters have been true to their comics aesthetic. Captain Marvel, released in 2019, introduced us to one of the most powerful characters in Marvel and the UCM and created an aesthetic that is truly identical to the one we have been able to read.

When Brie Larson’s character Carol Denvers asks Monica Rambeau what colors she should wear for her suit several are mentioned. They end up discarding all of them until they reach the color red and blue, which is the original color of the comics. 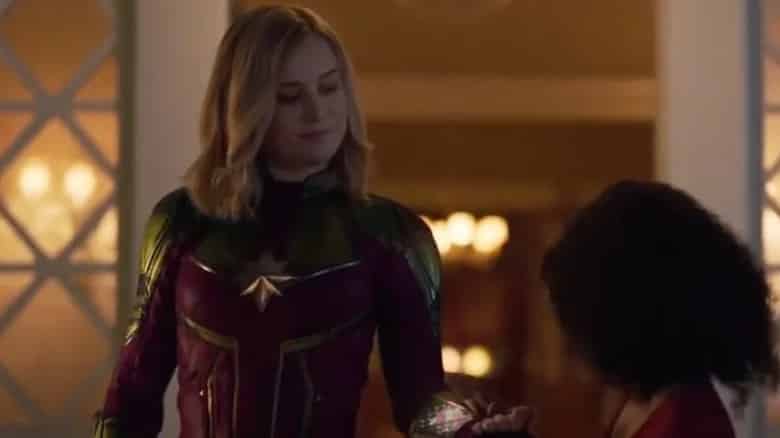 Guardians of the Galaxy scarf

If you look closely, after Thanos’ snap, in the latest Avengers movies, Avengers: Infinity War Y avengers:endgame, Rocket and Starlord share a red scarf that Peter Quill’s character was seen wearing in the early Guardians of the Galaxy movies.

Obviously, Peter Quill disappears after Thanos’ snap, so it stands to reason that Rocket keeps the scarf in memory of his fallen friend and companion. When he returns, he does not hesitate to give him a hug and return his red scarf. 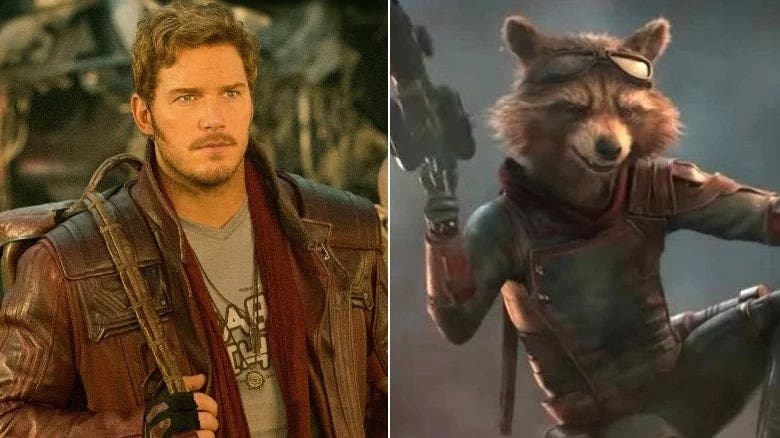 At the end of Avengers: Endgame we could see how Steve Rogers becomes an old Captain America, looking to live a normal life. When Steve travels back in time to return the Infinity Stones, Steve skips the planned plan and decides to live a life without being the superhero he once was.

His friend Bucky Barnes realizes that a Steve Rogers has appeared in the body of an old man, confirming that he has decided to live a normal life. If we look closely, Steve’s character appears in a brown jacket that we could see in the first Avenger movie.

Fans quickly realized that they were seeing the jacket that they had been able to see in the first film of this character, being the end of a perfectly structured cycle. 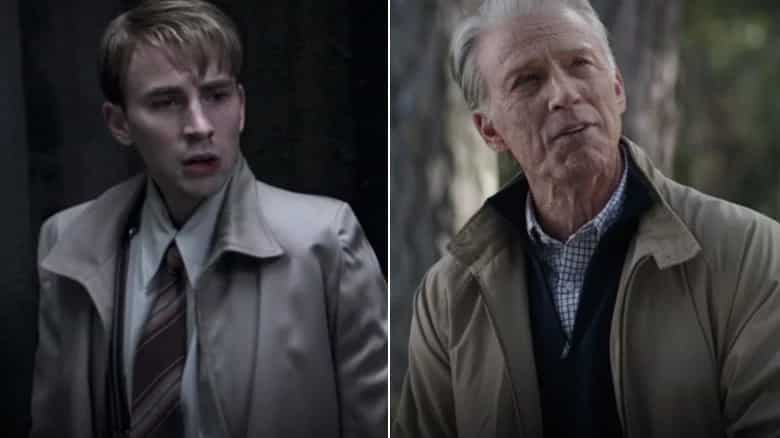 When T’Challa travels to Korea with his partners Okoye and Nakia they visit a casino with some pretty fancy suits. These suits have a very representative color within what is possible since there is a social movement called Pan-African created by a Jamaican thinker in the early 20th century.

The colors of the flag of this movement are black, red and green and as we can see in the image the characters wear these colors and in the correct position. Also throughout the film we see how Black Panther dresses in black, Okoye in red and Nakia in green, creating a perfect symbiosis between the characters.

Black Panther is a film with great social significance at the time it was released. This, added to the death of its protagonist, raised the film to a higher dimension. 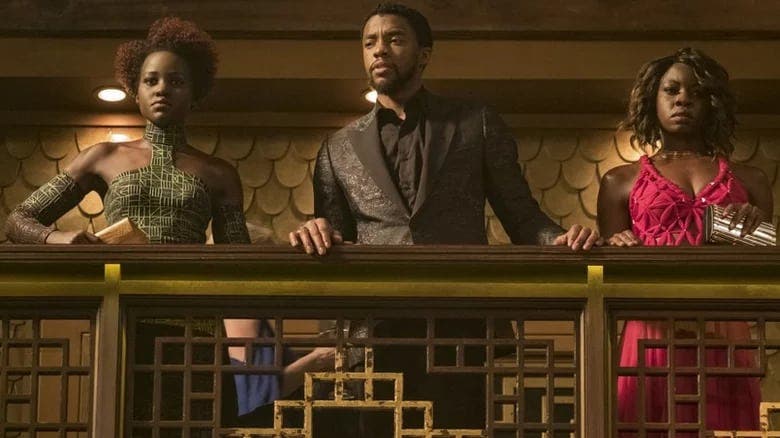 Flag Pan-African It’s not the only one easter egg that we can see in the first Black Panther movie. Killmonger, the main villain of this is another of the characters who are dressed with great care making a simile with his comics aesthetic.

After the first battle in which N’Jadaka supposedly kills T’Challa, we see how the regime of the character played by Michael B. Jordan is established. In the following confrontation is when we can see that this character wears a suit of a Golden Leopard, which is one of the most typical animals in Africa.

In the comics, Killmonger has a pet leopard named Prevy. This pet is trained to kill and has skills superior to any leopard. In the film we can also see how she is killed, but we do not get to know much more about the history of this animal. 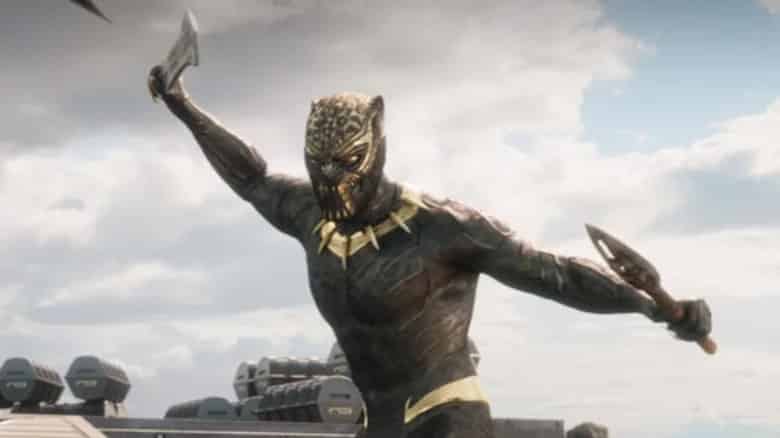 The secret message in the Black Panther suit

Director Ryan Coogler was tasked with adapting Black Panther for the screen. This had to create a totally new world with technology and symbolism different from what was previously seen in the MCU. Black Panther’s suit has a written symbology that we can see when he activates it by passing his hands over it.

Thanks to a Reddit user we have been able to know that this language exists, it is an African language called Xhosa. What is seen in this language would be a message to his mother, in which you can read: “I love you mom.” Now the question is whether this is something from the movie in a message from the superhero or in this case, it is an addition by Coogler to make his mother feel even more proud. 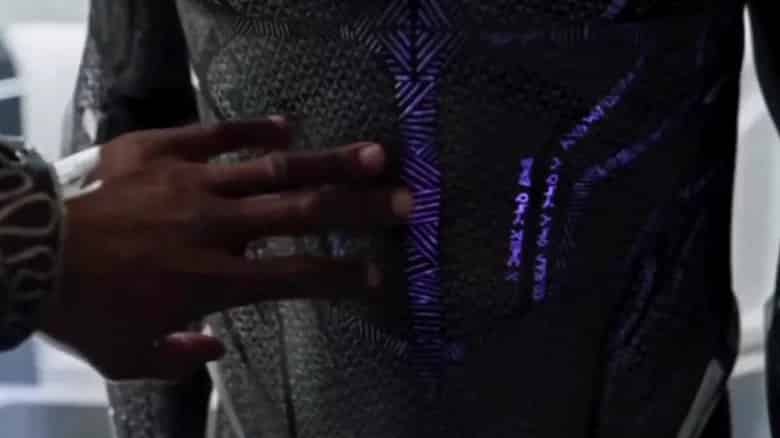 The UCM and its uniforms, what are they hiding? has been published by Sergio Beltrán at Cinemascomics.com | Movies, comics and series – Marvel and DC Comics superhero movie news, premieres, trailers.