What Convinced Marc Maron to Star in The Bad Guys 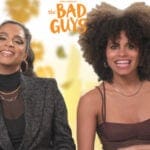 What convinced the WTF podcast host to sign onto his first major animated film? “The appeal was that they wanted me, specifically, and that it was about eight minutes from my house,” Maron joked when TheWrap recently spoke with him and other cast members during the film’s press day.

On a more serious note, Maron was drawn to the story and character. “I liked the movie, it seemed exciting, it seemed like it would get made.” For Craig Robinson, who voices Mr. Shark, he felt like it was “a dream” when he was brought into DreamWorks Animation and pitched the idea of ​​the movie and his character from him.

In the video above, you can watch as Maron, Robinson, Anthony Ramos, Zazie Beetz and Lily Singh talk about what drew them to the project, the film’s unique animation style, why Beets has a crush on her character and where they think a potential sequel might go if the franchise continues.

“The Bad Guys” is now playing exclusively in theaters.