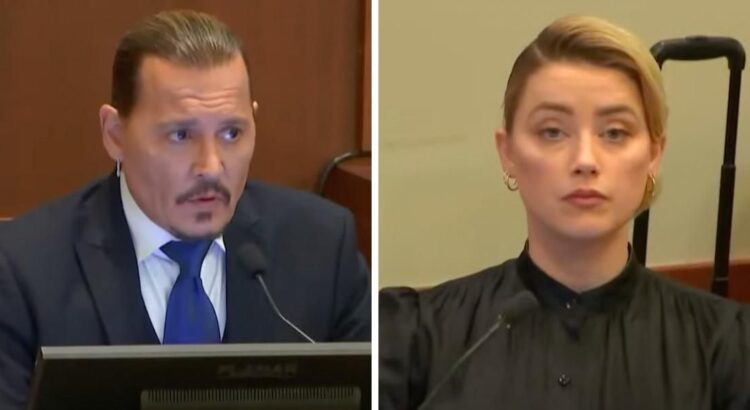 Johnny Depp wrapped up his testimony about Amber Heard in their defamation trial this week and the internet is still sifting through all the shocking moments that came out of the first part of their televised court battle.

Depp is suing Heard over a 2018 op-ed she wrote for the Washington Post in which she claims that she was a victim of domestic abuse. Although she never specifically mentioned Depp, the Pirates of the Caribbean actor’s lawyers say it clearly points to him.

Depp is seeking $50 million in damages and Heard is countersuing him for $100 million in a case that’s playing out in a Virginia courtroom and is available to stream live online via Court TV.

Here are some of the moments that captivated the internet during Depp’s testimony, with Heard expected to take the stand later on in the trial.

Depp revealed in court that he believed Heard was responsible for the feces that was found in their shared bed after he told her he wanted to end their marriage.

The issue came up in a previous UK court battle between the two.

Depp said his housekeeper sent him a photo of fecal matter that was left in the bed. Depp said that Heard tried to blame the incident on their dogs, but that didn’t make sense to him.

“It was so outside, it was so bizarre and so grotesque that I could only laugh,” said Depp.

Trial-watchers spotted a few similarities between Depp’s outfits and Heard’s in the early days of the trial. Some even suggested that Heard was copying Depp’s looks the following day, in what they claimed might be a kind of mind game.

Social media users pointed out that Heard seemed to copy Depp by wearing a tie with a bee lapel pin after Depp had worn a similar one. On other daysshe wore a gray suit similar to one he had worn the day prior, and a black ensemble after he had worn a dark suit.

Is it actually a thing though?

We took a look at their outfits over the last two weeks and while there are definitely some similarities over the first few days, the pattern doesn’t hold up in the long term, especially when Heard starts wearing dresses instead of suits.

Amber Heard’s lawyer, Ben Rottenborn, spent a few days cross-examining Johnny Depp on the stand, and many of the exchanges between the two later ended up on TikTok.

One clip shows Rottenborn going through Depp’s texts and asking, over and over: “Did I read that right?”

There was also one head-scratching moment when Rottenborn asked another witness a question, then objected to his own question mid-answer.

“You asked the question,” the judge said, as Depp and many others appeared to laugh.

Depp’s testimony included his description of a fight he said he had with Heard when the two were living in Australia. Depp said his finger tip was severed on glass from a bottle that Heard had thrown at him.

Around the same time, Depp visited a children’s hospital in Australia dressed as Captain Jack Sparrow from Pirates of the Caribbean. One of the children asked what happened to his fingertip from him and he responded in character, saying that he got hungry and ate it.

Depp told the court that he lied to doctors about how it happened.

Heard’s lawyer presented to video that she secretly recorded of Depp, in which he appears to smash and kick things in a kitchen before pouring himself a large glass of wine.

“I did assault a couple of cabinets but I did not touch Ms. Heard,” Depp said in court.

Depp then appeared to be amused by Rottenborn describing his glass of wine as a “mega pint.”

Amber Heard’s lawyers questioned Depp at length about texts he sent to and about Heard during their relationship. One big moment from that line of questioning came when they read out his texts from him to friend Paul Bettany.

“Let’s burn Amber!” Depp wrote to Bettany in a 2013 exchange, before he and Heard were married.

“Having thought it through I don’t think we should burn Amber,” Bettany said.

The texts got more graphic after that.

Depp claimed in court that he was making a reference to a Monty Python skit with the text.

Testimony is expected to continue into May, with Heard slated to take the stand at some point before the jury makes its decision.