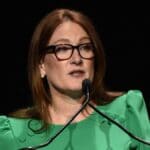 Jordan Peele brought an extended look at his mysterious new horror film “Nope” to CinemaCon during Universal’s presentation on Wednesday, and the look did a number on the unsuspecting crowd.

“I like making titles that match how the audience feels watching it,” Peele told the attendees. “Like you tell them that this movie is going to be scary and they’re like, ‘Nope!’”

Peele reunites with his “Get Out” star Daniel Kaluuya on the film, as well as Keke Palmer, Steven Yeun.

“Nope” follows Palmer (“Hustlers”) as a charismatic woman who owns the only Black-owned horse ranch in Hollywood, while Kaluuya plays her unamused ranch hand. But when an “uncanny and chilling discovery” descends upon the residents of their lonely gulch of inland California, well, things go sideways.

Peele said that the mystery and discovery of the film is part of what he tries to preserve, which is why he keeps his footage largely under wraps. In keeping with that spirit, we should warn you that spoilers are ahead.

The sneak peek showed Kaluuya and Palmer talking about the mysterious disappearances happening around the ranch, along with footage of Kaluuya running in the dark as a mysterious force in the sky in the middle of the night is chasing him.

The next day, the pair sets up a series of security cameras around the ranch, convinced that aliens are behind the strange disappearances and are bent on finding proof of extraterrestrial life. The trailer has Peele’s now signature mix of humorous banter between his character of him while they get in and out of harrowing situations… including a chase from a flying saucer.

The film is the perfect summer horror movie to get more diverse audiences back to the theater, with “Get Out” bringing in $255 million worldwide and his follow-up “us” from 2019 matching it with another $255 million.