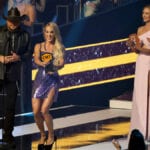 As host Ryan Seacrest noted, William Hung went viral as an “American Idol” contestant long before viral videos were a thing, and so it was fitting Hung returned for the show’s 20th anniversary celebration Monday night.

Hung performed the very song he auditioned with back in Season 3, way back in 2004 — “She Bangs” by Ricky Martin — looking much the same as he did almost two decades ago.

Turns out, Hung is now a motivational speaker. So, Seacrest asked what he tells those who attend his talks about him.

“I tell people I believe everyone has a right to try something new without being judged or ridiculed,” Hung said to cheers. (You can watch his performance and interview below.)

Hung wasn’t the only face from the “Idol” archives who visited Monday night’s broadcast.

An all-grown-up David Archuleta came back and was joined onstage by a group of women, who screamed in disbelief when David Cook beat out Archuleta for the “Idol” crown in 2008. And yes, they are still fans of Archie.

Cook was back, too, performing with another winner — Kris Allen (Season 9). The two performed The Cranberries “Dreams” together. 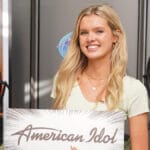