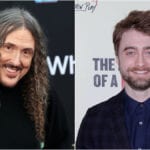 Ready to get weird?

“Weird: The Al Yankovic Story,” a pseudo-biopic of the master accordion player/parodist “Weird Al” Yankovic is nearly upon us, and the first teaser trailer is here to give us an idea of ​​the tone/vibe of the new film coming to this fall. You can watch it above.

The movie stars Daniel Radcliffe, recently seen hamming it up in “The Lost City,” as Yankovic. “Weird” was co-written and produced by Yankovic, so you can understand that if the story ever veers too far into “musical biopic” territory, it quickly takes a left turn into sublime silliness. (The co-writer/director, Eric Appel, is a veteran of “Brooklyn Nine-Nine” and “The Office,” and the movie is based, in part, on a fake trailer Appel made for Funny or Die.) The closest comparison is probably “Walk Hard,” only this time it’s based on an actual person’s life.

During a Roku presentation at NewFronts earlier today, Radcliffe described the experience of making “Weird” as “genuinely one of the most fun things I’ve ever gotten to do in my life.” “If it is as much fun to watch as it was to make, I think you will really enjoy it. And you better because I learned the accordion for this and that instrument is a nightmare!” Radcliffe said.

“Weird: The Al Yankovic Story” has a terrific supporting cast that includes Evan Rachel Wood (as Madonna!) and Rainn Wilson as gonzo radio personality Dr. Demento. Julianne Nicholson and Toby Huss also star. The movie was shot in just 18 days earlier this year and will arrive exclusively on the Roku Channel. Somehow all of this just perfectly adds to the absurdity. Do you know what the Roku Channel is? If you have a Roku Channel do you even know how to access the Roku Channel? Exactly.

See also  Raya & The Last Dragon: Druun Monsters Explained (And How To Get Rid Of Them)

“Weird: The Al Yankovic Story” arrives this fall on the Roku Channel.