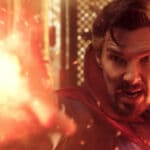 The next Marvel Cinematic Universe movie is nearly here, and “Doctor Strange in the Multiverse of Madness” promises to expand the MCU in a major way: by opening up the multiverse, of course.

First teased majorly in last year’s “Spider-Man: No Way Home,” the multiverse paves the way for different iterations of the same character to populate the MCU as we know it, and “Doctor Strange 2” finds Benedict Cumberbatch’s titular sorcerer (along with Elizabeth Olsen’s Wanda Maximoff and some other friends) hopping from reality to reality, encountering different versions of themselves as well as new heroes destined to spawn new MCU franchises of their own.

The first “Doctor Strange 2” reviews are in ahead of the film’s May 6 release date, and while Marvel movies are usually fairly critical proof, last year’s “Eternals” – which was the first Marvel movie to earn largely negative reviews in years – stumbled at the box office. So how does “Doctor Strange in the Multiverse of Madness” stack up? The consensus seems to be it’s a fun ride, with “Evil Dead” director Sam Raimi allowed to bring some horror-tinged flourishes of his own, but ultimately it may prove to be an exhausting trip for some.

TheWrap’s Alonso Duralde said that while the film delivers on spectacle, it’s light on the humanity that elevates other MCU films: “The follow-up to 2016’s ‘Doctor Strange’ hits the ooh-and-aah marks we expect from a well-crafted Marvel adventure, but even with Sam Raimi at the helm, this entry goes heavy on the spectacle but light on the humanity.” Duralde added, “The surface of this Everything Bagel is loaded with ingredients, but it lacks a certain flavor.”

Brian Tallerico of RogerEbert.com was similarly mixed on the film, noting that the overindulgence of CGI and Easter eggs left him feeling unfulfilled: “There have been complaints about MCU properties that feel like they exist merely to get people interested in the next movie or TV show, but it’s never felt so much like a snake eating its own tail as it does here. Or at least the spell has worn off for me.”

Over at VarietyOwen Gleiberman called the convoluted plot “exhausting”: “Just because you followed it all doesn’t mean that ‘Doctor Strange in the Multiverse of Madness’ earns every one of its elaborate and at times exhausting convolutions.”

At TimeStephanie Zacharek praised Raimi’s flourishes throughout the film: “Even in the midst of its typically (for Marvel movies) convoluted plot, ‘The Multiverse of Madness’ has a Raimi-like sense of bleak humor,” adding, “if you squint and concentrate really hard, you can tell it’s a Sam Raimi movie.

Slashfilm’s Hoai-Tran Bui had similar praise for Raimi’s touch: “The result is a horror-tinged trip that is as macabre and gnarly as Marvel has ever been, and as muted as Raimi has ever been. But even at his most mutated from him, Raimi gives us one hell of a ride.

Indeed, many critics noted that Raimi’s fingerprints are more prevalent throughout the sequel than some expected. David Ehrlich of IndieWire praised the film’s “violent” and “wacky” second half: “Slowly, gradually, and then with great enthusiasm, what begins as a staid tale of people hurling CGI at larger pieces of CGI while yammering on about whatever new thing is threatening all existence evolves into something less familiar: A violent, wacky, drag-me-to-several-different-hells at once funhouse of a film that makes good on the reckoning Chiwetel Ejiofor promised at the end of the original by cutting away the safety net that previous installations of the MCU have tried to pretend wasn’t there.”

See also  Naruto: 10 strongest characters who only fought one battle in the series

THR’s John Defore echoed Ehrlich’s sentiments about the film’s final act being its best: “Though never as darkly weird as its Lovecrafty title promised, ‘Madness’ starts to play more to Raimi’s strengths — it’s looser, more kinetic and occasionally goofy despite the big stakes — and to offer some visions that may stick in viewers’ heads even after they’ve started devouring trailers for stories set in Wakanda, Asgard and the Quantum Realm.”

As for the promise of a horror-tinged MCU film, IGN’s Amelia Emberwing said “Doctor Strange 2” makes good: “Plenty of spooky scaries are lurking around corners — especially as things ramp up in the third act. Is it too scary for your kiddo? Your mileage may vary! The horror aspects help earn the PG-13 rating here, but contemplating the idea of ​​half of the known universe suddenly disappearing seems a lot more complicated to stomach than a monster or two!”

“Doctor Strange in the Multiverse of Madness” opens exclusively in theaters on May 6.