Another ‘The Waltons’ TV Movie in the Works at The CW 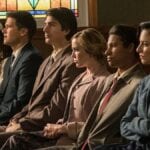 Another Waltons family made-for-TV movie is just around the corner. “The Waltons’ Thanksgiving” will debut later this year (fourth quarter 2022) on The CW.

Bellamy Young, Logan Shroyer and Richard Thomas will reprise their roles from the last TV movie, “The Waltons’ Homecoming,” for this latest film. Teddy Sears also joins the cast.

Thomas, who originally starred as John Boy Walton in the 1972 TV series “The Waltons,” will narrate the movie.

Here’s the logline for the film: “The holiday spirit is in the air on Walton Mountain in 1934 as the Walton family eagerly prepares for the annual Harvest Festival Fair in town. Carnival rides, talent shows and pie contests come around every year, but at this year’s Harvest Festival Fair, a young boy arrives that will dramatically change the Waltons’ lives in ways that they could have never imagined.”

“The Waltons’ Homecoming” debuted last year on The CW. The film followed the Walton family as they prepared for John Sr. homecoming to spend Christmas together. After a storm got in the way, John Boy had to find his father and the journey through it changed his life forever.

Joe Lazarov will direct and also serve as co-executive producer. Tena Clark is the composer. “The Waltons” original series was created by Earl Hamner, Jr.