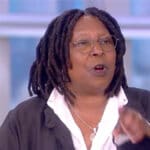 According to the late night host, there are many people to blame for the decision, which has drawn harsh criticism, ignited protests outside the Supreme Court and led to an investigation. However, he contended, none should be shamed more than the Justices themselves — and the people who confirmed them to begin with.

“I’m not a lawyer. I can’t tell you if Roe was rightly decided, but I can tell you that it’s an important precedent that has been repeatedly affirmed. And that’s not my opinion. It’s the opinion of these clowns,” he explained before rolling clips of Justices Alito, Coney Barrett, Gorsuch, and Kavanaugh all agreeing during their confirmation hearings that the decision on Roe v. Wade was the law of the land.

He then pondered why the Justices didn’t tell Congress during their confirmation hearings, if they actually believed that the 1973 decision should be overturned.

“Well, because American voters support abortion in all or most cases at 80%,” Colbert said. “They knew that if they were honest they wouldn’t get the job, so they lied. Which I think is perjury. But what do I know? I’m not a Supreme Court Justice. I’m not a good enough liar.”

Colbert also took aim at Republican Senator Susan Collins, who supported the confirmation of Kavanaugh and Gorsuch to the court on the basis that he supported abortion rights. At the time, she affirmed that she had “full confidence” he would not overturn the decision.

Following the leak, Collins issued a statement that said the decision, if final, was “completely inconsistent” with what the two Justices said during their meetings with her before they were confirmed.

“Okay, so she’s just another gullible grandma. ‘I don’t understand why they lied. We pinky swore in my office,’” he mocked.