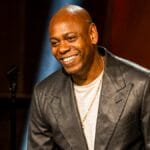 Dave Chappelle was tackled onstage Tuesday night at the Hollywood Bowl by a person with a makeshift weapon, but the comedian was apparently not injured, continued his set and then joked about it later, according to multiple reports.

Video circulating online shows a man running onstage during Chappelle’s appearance at the Netflix is ​​a Joke Festival at the Los Angeles outdoor venue. Multiple witnesses said Chapelle tussled with the man on the floor before he ran off behind an onstage screen, where security subdued him, with Chappelle giving chase.

Local Affiliate KABC helicopter video showed the suspect, who has not yet been identified, being taken away on a gurney by medical staff. Police confirmed they responded to an incident at the Hollywood Bowl around 10:45 pm

It was not clear whether the man had been injured. NBC NewsLos Angeles reported that the suspect was carrying some kind of replica gun with a blade attachment, but it wasn’t immediately clear whether he tried to use it.

A Buzzfeed reporter who was in attendance tweeted that she saw the suspect get his “ass kicked” by several people before being loaded onto a gurney and taken away.

Another video showed Chapelle taking the attack in stride.

“It was a trans man,” he reportedly joked, a reference to his multi-special comments about the trans movement that have gotten him into hot water. His comedian colleagues of him had their own take on the failures.

“Was that Will Smith?” joked Chris Rock, who had performed earlier and joined Chapelle onstage after the attack. The Oscars slap-ee, who now has even more in common with Chappelle, has still been fairly mum about the incident at this year’s Academy Awards.