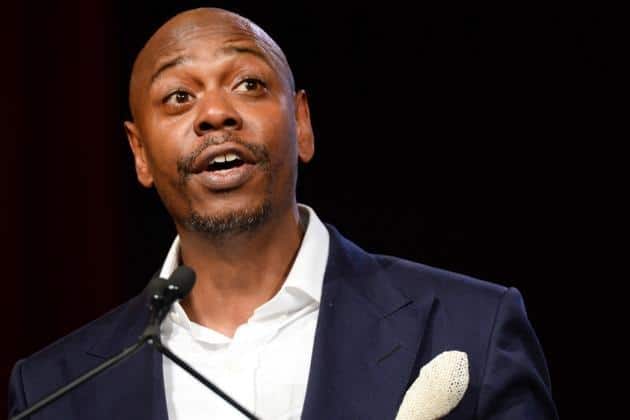 UPDATED: Police have arrested Isaiah Lee, 23, on suspicion of assault with a deadly weapon, according to NBC Los Angeles. He was allegedly carrying a replica gun that could discharge a knife blade and is suspected of tackling comedian Dave Chappelle on stage Tuesday night. He’s being held on $30,000 bail.

Chappelle was attacked while performing onstage Tuesday at the Hollywood Bowl in Los Angeles.

Video footage shows a man rushing on to the stage and tackling the performer to the ground during the Netflix is a Joke comedy festival, for which Chappelle has performed a number of dates at the Hollywood Bowl in the last month. The attacker then gets up and tries to run off-stage before he is caught and tackled by what appear to be security personnel and members of Chappelle’s team.

Video footage of the incident is sparse because guests’ mobile phones were supposed to have been inaccessible to them during the performance. (The Hollywood Bowl website indicates that attendees’ phones were to be secured in Yondr devices, which allow guests to keep their phones, but seals them off so they can’t be used. They can be accessed only in designated ‘Phone Use Areas’ at the venue.)

According to the snippets that have emerged so far, Chappelle appears to be largely unhurt and quickly regained his composure after the attack. “It was a trans man,” he joked later.

Chappelle has been a controversial figure for his frequent jokes about transgender people and the perception that he is transphobic.

Also joining the fray was comedian Chris Rock, who had performed a set earlier in the evening. According to ABC News, Rock — who was slapped by actor Will Smith While presenting at the Oscars in a now infamous incident — came on stage with Chappelle just after the attack and quipped: “Was that Will Smith?” (This interaction is seen in a video below, though the footage has not been independently verified by Variety.)

Rock has so far refrained from making any pointed public comment about the Oscars slap and Smith.

Actor Jamie Foxx is understood to have rushed on stage to help Chappelle and apprehend the attacker.

“Whenever you’re in trouble, Jamie Foxx will show up in a sheriff’s hat,” quipped Chappelle at the show’s curtain call. Unconfirmed video shows Foxx responding: “I thought that was part of the show.”

The incident has unfortunate echoes of Smith’s slap of comedian Chris Rock during the Oscars ceremony in March, and will likely raise questions about freedom of speech and the security of performers.

In another unconfirmed phone video clip, Foxx is heard saying of Chappelle: “Listen, I just want to say this man is an absolute genius. We’ve got to make sure we protect him at all times … For every comedian who comes out here, this means everything. You’re a genius. You’re a legend, and we’re not going to let nothing happen to you.”

Variety has reached out to Netflix, LAPD and the Hollywood Bowl for comment.

Chappelle and his comedy have grabbed headlines in recent months, largely due to his Netflix comedy special “The Closer.” In the special, which was released in October, the comedian addressed his long history of making jokes about the LGBTQ+ community, especially trans people, but doubled down on the offensive humor.

See also  The first motion picture film to fail in 2022

The comedian called himself a member of “team TERF” (a term that stands for “trans exclusionary radical feminist”) and shared an anecdote about beating up a lesbian woman. Chappelle’s comments and Netflix CEO Ted Sarandos’ initial defense of him came under fire with protests, including by staff at Netflixthree of whom were suspended and later reinstated.

Most recently, Chappelle made the news for helping to kill an affordable housing plan in his hometown of Yellow Springs, Ohio.

Selome Hailu contributed to this story.