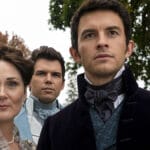 “The Theory of Everything” star Felicity Jones and “Bridgerton” actor Jonathan Bailey are set to star in a comedy called “Maria” that will be introduced to buyers at this year’s Cannes market.

Simon Amstell (“Benjamin”) is writing and directing “Maria,” and Jason Isaacs is also attached to co-star in the project. Production is expected to begin in the UK and US later this fall.

“Maria” stars Jones as a woman struggling to accept her age, her boyfriend’s love and her father’s indifference. But she meets her new stepbrother de ella at her father’s wedding and learns not only that she has inconvenient sexual chemistry with him but also that her father de ella has been diagnosed with a terminal illness.

Bailey will portray Jones’ boyfriend, while Isaacs plays her father.

Independent Entertainment is introducing “Maria” to buyers at the Cannes Film Market this month, and EMU Films, which has produced “Benediction” and Steve McQueen’s “Small Axe” anthology, is producing.

Jones last starred in “The Last Letter From Your Lover” in 2021 and is an Oscar nominee for “The Theory of Everything.” Bailey plays Lord Anthony Bridgerton on the hit Netflix series “Bridgerton.” In film he’s also starred in 2018’s “The Mercy” and 2016’s “The Young Messiah.”