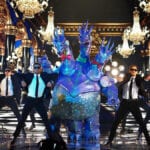 Round 3 of “The Masked Singer” is coming to a close Wednesday night, and three contestants remain in contention for a spot in the finals.

One of those contestants is The Prince, who is a member of Team Good. While their true identity has yet to be revealed, judge Robin Thicke thinks the person behind the dashing frog costume might be a man of many talents.

In an exclusive clip shared with TheWrap, which you can watch above, Thicke contains that The Prince is none other than “Dear Evan Hansen” star Ben Platt.

The “Blurred Lines” singer reasons that some of the clues that the judges and audience have been given point directly to Platt, like the hint that this contestant has leading roles in both Broadway and film. Platt, of course, was known for her role in “Pitch Perfect” before landing “Dear Evan Hansen.”

Only time will tell if Thicke’s guess turns out to be correct. So far, The Prince has wowed the judges with renditions of “La Copa De La Vida” by Ricky Martin and “Lay Me Down” by Sam Smith.

On Wednesday night, audiences will get to find out if The Prince is headed to the finals, or if he’s reached the end of the road.