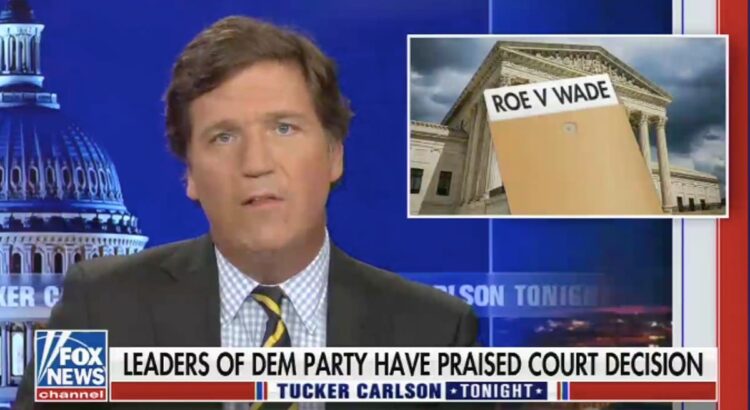 While numerous alarm bells have sounded across the country and political spectrum about the imminent Supreme Court action to strike down Roe v. Wade — which protects the right to abortion — far-right pundit Tucker Carlson is unsurprisingly unconcerned, calling the landmark 1973 decision “the most embarrassing” of the last century while also mocking people scared about the loss of their rights.

On his Tuesday evening show, the extremist Fox News host called Roe v. Wade to “widely acknowledged joke,” falsely claiming that it has no basis in the Constitution.

“It’s all pretty bewildering if you consider what Roe v. Wade actually is,” Carlson said. “And that is true no matter what you think of abortion itself, whether you’re strongly for legal abortion. The decision—as a decision, Roe v. Wade is a widely acknowledged joke.”

According to the original ruling, the Supreme Court agreed that plaintiff Jane Roe (later identified as Norma McCorvey) had the right to terminate her pregnancy as a result of the due process clause in the Fourteenth Amendment, which reads that no state shall “deprive any person of life, liberty or property, without due process of law.” This implied right to privacy was previously established in the 1965 ruling Griswold v. Connecticutwhich protects the right of married couples to use contraceptives.

Carlson continued, “Moral questions aside, Roe is the most embarrassing court decision handed down in the last century. Every part of it, from its invented constitutional justification to its meaningless parameters mocks the idea of ​​sober jurisprudence.”

See also  Why Ewoks: The battle for Endor came with a warning for parents

The host added that the point of the Supreme Court is to “interpret the Constitution,” which is exactly what it did with the 7-2 Roe v. Wade ruling. However, he called the ruling “invented,” saying that because the word “abortion” is not mentioned in the Constitution, it should not be guaranteed. If his uberstrict constructionist view of the Constitution were to prevail, civil rights would be set back centuries.

Many on social media have lamented that the striking down of Roe v. Wade will lead to the overturning of many other significant civil liberties, notably Lawrence v. Texas and Obergefell v. Hodges, which decriminalized same-sex relations and legalized same-sex marriage, respectively.

Carlson also mocked this concern, sarcastically stating, “Between a bright new tomorrow and the hell of ‘The Handmaid’s Tale,’ stands only Roe v. wade.”

Watch the full clip below: