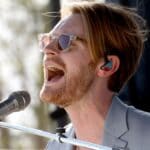 There are plenty of stories of Pixar movies that had, at one time, drastically different vocal performers. William H. Macy was Marlin in “Finding Nemo.” Elizabeth Banks was Joy in “Inside Out.” And the list goes on. What’s rarer is an actor that is cast during the early days of production and make it all the way through. In fact, the only one that comes to mind is Rosalie Chiang, who voiced Mei in the initial phases of “Turning Red” and stuck around until the film was released earlier this year.

Mei is the teenage girl who discovers that she is the victim of an ageless family curse. When she gets upset, she turns into a giant, very fluffy red panda. This of course leads to complications with her friends from her at school and puts a greater strain on her relationship with her overbearing mother from Ella Ming (Sandra Oh). If you somehow haven’t seen “Turning Red” yet (it was initially a Disney+ exclusive), you have even more ways to watch it now, as it has just debuted on digital HD, Blu-ray and 4K HD Blu-ray.

TheWrap spoke with Chiang about what it was like going from recording the scratch dialogue to actually being a part of the movie, what it was like working on the movie during quarantine and if Pixar is really as magical as everybody says it is.

How did you initially get recruited to do the scratch?

Originally, it was just a normal audition from my agent. I did the audition, and then I got a call back and I did the call back. And the call back actually took place in the Pixar Animation Studios. I got to meet a lot of the people behind the scenes, like Domee, the director, Julia Cho, the writer. And that’s just how I got into scratch. I did some scratch for two years or so, and then I officially booked it.

Most actors don’t really get to see the movie change as much as you probably did. What is the most different version of “Turning Red” that you worked on?

I think the most different version was the first version I recorded, which was when I believe, Tyler, originally his name was Leo. And also he was Mei’s cousin. And in that plot point, Leo also turns into a giant red panda. And at the end they have this almost Godzilla fight with these two giant red pandas going. In this version, it didn’t really focus on the mother and daughter bond, it focused more on the friendships between these two cousins.

Did you ever think you were actually going to be cast in the role or was it a complete surprise when you finally got cast?

Well, I think at the time, just at the callback itself, I thought I was going to officially book it. And then when I got the email saying I booked it, but not officially, I was really confused about that. I realised, Oh so I’m not the official voice, I’m just a temporary voice. And I was really nervous. I told my parents, “Oh my gosh, I really want to get this. If I don’t get this, that’s a disaster.” And then my parents told me, “You know what, this is a great opportunity whether you book it or not. So just do your best for each recording session. Cause that’s all you can really do. And if you book it, great, and if you don’t, well, then it was a great experience.”

People talk about what a magical place Pixar is. What was the experience like for you?

Pixar Animation Studios is as magical as everyone says it is. It’s like, when you imagine what you think Pixar, the studio would look like, it’s exactly how you would imagine it. It’s just this really beautiful, gigantic campus with really tall buildings that are filled with Pixar decorations. And then there’s giant looks of junior right outside. And it’s a functioning lamp too. Just the ambience, you can tell people enjoy working there.

Did you have to finish recording your performance at home?

Well, I actually, the day I booked [the job] was the last recording session and then we had to all go into quarantine. And I did film a portion at home, but then since I was just a drive away from the studios, I think around six months or so I was able to go back to the studio to record. And it was just a difference in that literally no one was there except us and filming was in a completely different room. And a lot of people were still from home, Zooming in.

There’s a lot of secrecy around Pixar projects. Was it hard to keep that from your friends and family members?

Oh sure. There was plenty of times where I’m like, “Oh, can I just say a little bit?” Cause this a four-year secret. And I kept on telling friends, “Oh, I have this big project coming up,” and big project doesn’t mean anything to them. But it wasn’t until the teaser trailer came out and then the cast came out that they were like, “Oh my gosh, no fricking way.”

What do you think about the response to this movie?

This response is incredible because I feel like in, of course in my household, “Turning Red” is a big deal because I’m in it. But then, so I don’t really know exactly how people outside of my circle would really react to this film. But when I recently joined TikTok, which is a space I was completely unfamiliar with, that was when I realized just how big “Turning Red” is because people are talking about it and they made memes and stuff. 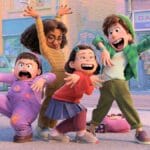 Do you have a favorite 4*Town song?

Favorite 4*Town song… I’ probably say “Nobody Like U,” because I think it was the first song I was able to listen to. And they sent me the demo of, I believe it was Finneas recording it and they just needed me to listen to it and jam out to it in the recording session which wasn’t too hard.

“Turning Red” has opened a big dialogue about intergenerational trauma. Does it make you happy and proud that you’re part of something that has opened up all these conversations between people?

Absolutely. I feel like a lot of movies I’ve seen, I never really related to. But then with this movie for me, and because I didn’t relate to other movies, I thought my story was different and weird and just not necessarily, non-existent almost or I’m the only one going through this. But then I hope, but then this movie depicts a lot of the things that I went through and it’s cool to see other people responding, be like, “Yeah, this is how it was for me too.”

Have you started bugging Domee about a sequel?

Oh sure. I think it was the Toronto premiere where we were waiting in a room and we’re just going through all the possibilities that this franchise has because for real, you can make a sequel where Mei goes to high school and then she goes to college and then all the stages of her life as a red panda. Or we could even do a prequel where it’s what happened with Ming and her mom de ella. Hell, a TV series with just adventures of Meilin Lee.