Amber Heard Says Johnny Depp Tormented Her on Plane While Friends Watched: ‘Nobody Did Anything’ 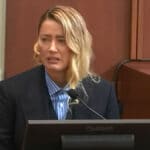 Amber Heard described from the witness stand Thursday a harrowing cross-country plane ride with Johnny Depp and his entourage, who she claimed sat silently while the “Pirates” star viciously taunted her, threw objects at her and kicked her to the ground – all while wasted and apparently triggered by jealousy over James Franco.

It was a second day of testimony for Heard, who is having her say four weeks into the $50 million defamation trial brought by her ex-husband Depp.

Under examination by her own lawyers Thursday, Heard retraced the beginnings of her relationship with Depp, from their engagement to her growing relationship with his children, whom she affectionately called “intelligent little weirdos.”

But even early on, she and Depp were in constantly tense negotiations about parts she was considering, in particular whether they had romantic elements or sex scenes. Aside from that, he was getting into a “more sober period,” and the relationship briefly stabilized, she said.

“Our life was peaceful for a minute,” she said. “It was wonderful.”

But she said Depp snapped during a meeting after she had been working with James Franco on “The Adderall Diaries” in New York while he was shooting in Boston. Depp, she said, already believed they had a romantic past from their time working together on “Pineapple Express.”

Heard grew emotional when describing how she went to Boston so they could all ride back to Los Angeles together for Depp’s daughter’s birthday. The night before, Depp did not seem consistent on the phone, and she was extremely upset over what she had disclosed to him about her time on set, she said.

“It was like I told him I was having an affair or something,” she said. “He was that angry at me. But he was starting to sound less connected (throughout the day).” 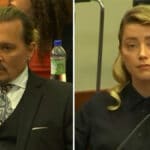 Heard said she knew he’d been using, but figured he’d be sobered up in time for their flight the next morning. However, when he boarded, she said he “reeked of alcohol and weed” and immediately began questioning her about the “Adderall” shoot, accusing her of explicit sexual experiences and motivations, and asked repeatedly whether she “had something to tell him.”

When she tried to move away, she said he threw ice cubes and utensils at her, and followed her around the plane to continue his harsh and explicit inquisition. At one point she said he kicked her in the back of her so forcefully that she fell to the ground. And the worst part, she testified, was that Depp’s friends and staff were present to witness it – but did nothing.

“I was just looking at the floor of the plane for a very long time, I didn’t know what to do,” she said, sobbing. “No one said anything! No one did anything! You could hear a pin drop on that plane. I felt so embarrassed that he could kick me to the ground in front of people.”

Heard has claimed that Depp physically and emotionally abused her before their 2016 divorce, describing herself as a victim of domestic violence in a 2018 Washington Post op-ed. In his earlier testimony from him, Depp said he never once hit Heard, painted her as the abusive one from her, and claimed her op-ed cost him career opportunities.

Heard was expected to continue her testimony Thursday after a break.

Jenyne Donaldson contributed to this report.