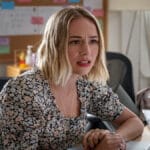 Bill Hader may be known for his spot-on impersonations during his time on “SNL,” but when he was a guest on “Late Night With Seth Meyers” on Tuesday night, his former “SNL” boss decided to turn the tables.

Hader was on “Late Night” to discuss the third season of his HBO series “Barry,” which is currently airing, but Meyers – who was head writer at “SNL” during Hader’s tenure – took a moment during the interview to break some tough news to his former colleague.

“Oh really?” Hader replied, then the “Barry” co-creator asked Meyers to show him some of his impressions of her, which launched a non-stop giggle fest between the two.

Meyers has, in truth, been showing some really terrific impressions on “Late Night” over the last few years, but for Hader’s benefit he kept his example impressions short. For Al Pacino, it was one line. For Vince Vaughn, it was one word repeated over and over. And for Michael Keaton, it was just one word.

And through it all, Hader couldn’t keep it together. The moment recalled the many Stefon appearances by Hader on “SNL” when writer John Mulaney would sneak jokes into the cue cards to make Hader break. While Hader initially tries to go along with Meyers’ bit, he ca n’t hold in his laughter when Meyers launches into his impressions of him.

It’s a delightful moment between two very funny friends. Watch it in the player above. 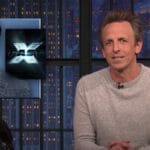