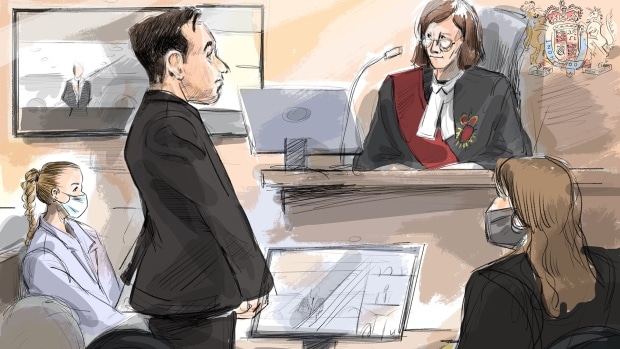 TORONTO – Prosecutors allege Canadian musician Jacob Hoggard repeatedly and violently raped a teen girl and a young woman in two separate incidents months apart, leaving each of them bleeding, bruised and sore as they left his Toronto-area hotel.

In an opening statement to jurors Thursday, Crown attorney Kelly Slate laid out the evidence prosecutors expect will emerge in the singer’s trial over the next few weeks.

Each complainant is expected to testify that what happened in Hoggard‘s hotel room in the fall of 2016 wasn’t what she envisioned or wanted, and that she was “crying and saying no” throughout the hours-long incident, Slate told the court.

An agreed statement of facts read in court Thursday said Hoggard had a “sexual encounter” with each of the complainants on the days they came to his hotel.

The musician has pleaded not guilty to two counts of sexual assault causing bodily harm and one of sexual interference, a charge that refers to the sexual touching of someone under the age of 16.

One of the complainants began her testimony Thursday, describing herself as a longtime fan of Hedley, the band Hoggard fronted. She went to one of the band’s shows for the first time at age 10, and saw them 10 to 15 times over the years, amassing a collection of memorabilia, she said.

she met Hoggard after a show she attended when she was 12, the complainant said. Hoggard exchanged phone numbers with her parents and, over time, helped them obtain tickets and backstage passes for other Hedley shows, she said.

They began communicating directly after she copied Hoggard‘s number from her mother’s phone when she was 15, she said. The young woman testified that when she told Hoggard she had his number during a meet-and-greet event in April 2016, he replied, “You should just use that sometime.”

They began texting shortly afterward and eventually moved some of their conversations to Snapchat, an app where photos and messages are only visible temporarily, the complainant said.

“The conversations slowly started to develop to more of a sexual nature,” and Hoggard eventually asked for photos of her nude, she said, adding that she complied with his request.

Hoggard also sent her romantic messages, saying that he loved her, saw a future with her and wanted her to bear his children, the young woman told court.

“It felt almost like a relationship,” she said. “He’s telling me that I’m this beautiful person that he loves… it was like a ‘pinch me’ feeling almost.”

A few weeks after they began texting, Hoggard arranged for the teen to come to a Hedley show at what is now the Scotiabank Arena in Toronto, sending a limo to pick up the girl and two friends in their hometown north of the city, according to the agreed statement of facts.

When they met up backstage after the show, Hoggard lifted her up by placing her hands under her buttocks and swung her around, she said. Every time they took a photo together, her hand would slide from her lower back to her buttocks, occasionally squeezing it, she said.

See also  Attack on Titan: 10 times the villains were sympathetic

The complainant said she repeatedly moved out of the way or grabbed his wrist, hoping he would get the message that she didn’t like it.

On the way home, she and her friends talked about “how strange it was that he was touching me in that manner,” since that had never happened before, she said. In the end, she dismissed his behavior that night as something out of character, she said.

The girl left early after pretending she had been called in to work, then blocked Hoggard from messaging her and never went to a Hedley concert again, prosecutors said.

The agreed statement of facts said the girl went to the hospital on Oct. 12, 2016, nearly two weeks after the alleged incident.

The second complainant met Hoggard on Tinder when he was in Ottawa to perform for WE Day, and the two began exchanging messages through text and Snapchat, the Crown said.

They planned to meet in Toronto in November 2016, and while the woman anticipated they would be having sex, she did not consent to what happened, Slate said.

Hoggard purchased train tickets for the woman to come see him in Toronto, according to the agreed statement of facts.

prosecutors allege Hoggard raped the woman vaginally, anally and orally over several hours, slapped her, spit in her mouth and choked her so she couldn’t breathe. At one point, the Crown says, he dragged her to the bathroom by her legs.

The woman took the train back to Ottawa that evening and her then-roommates are expected to testify that she was “upset, crying and emotional” when she got home, Slate said. One observed that she could barely sit down and had trouble walking, the Crown said.

She went to the doctor within a week of the alleged incident, according to the agreed statement of facts.

Hoggard was arrested and charged in 2018 and was originally set to face trial in January 2021 but the case was postponed on multiple occasions due to the COVID-19 pandemic, which saw new jury trials put on hold for months.

This report by The Canadian Press was first published May 5, 2022.