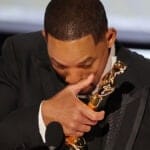 The latest guest list for David Letterman’s Netflix show “My Next Guest Needs No Introduction” has been unveiled.

Letterman is welcoming Billie Eilish and Ryan Reynolds to the stage in the upcoming fourth season.

Also joining Letterman for interviews are Cardi B, Julia Louis-Dreyfus and Kevin Durant.

Will Smith also sat for an interview, however the talk will not address the Oscars incident as it was recorded prior to March 2022.

Netflix first ordered the series in 2017, and it premiered the following year.