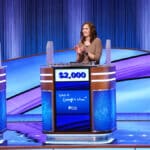 Ken Jennings and Mayim Bialik have shared hosting duties on “Jeopardy!” since August 2021, but neither have engendered the kind of devotion that late longtime host Alex Trebek commanded.

On Thursday, Jennings and Bialik failed to land nominations for the Daytime Emmys.

Trebek, who died in November 2020, was honored with a posthumous nomination last year for Outstanding Game Show Host. The 2021 search for a replacement host, which led to former executive producer Mike Richards naming himself to the slot, ended with Richards’ firing from both “Jeopardy!” and “Wheel of Fortune.”

In December, Jennings, a popular former contestant and “The Big Bang Theory” star Bialik, were announced as interim hosts through the end of the 2021-2022 season. It’s not clear if the duo will continue hosting through the 2022-2023 season, and that uncertainty may be one of the reasons why Daytime Emmy voters ignored them.

At least someone had a winning streak this year: Contestant Amy Schneider’s 40-game win boosted ratings for the game show.