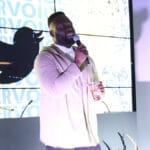 In collaboration with Harris’ Unique Sports Management International (USMI), TBCS will work on content featuring noted sports figures based on relevant stories produced by Stokes. Additionally, TBCS aims to create ancillary incomes for the athletes through promotion on social media and digital platforms.

Projects underway include “Memphis on the Mountain Top,” a docuseries showcasing the intersection of iconic civil rights leaders, sports and music during the city’s struggle in the late ’60s as the epicenter of the social justice movement, and “Learning to Win,” a television series hosted by Stokes. “Learning to Win” takes A-list sports figures back to their past, reuniting them with an educator who made a difference in his/her life.

Another project, “Break the Cycle,” is a coming-of-age basketball drama series, while “Rocky Top College” is a collegiate sports drama series.

Also being produced is an animated film version of “Wings to Fly,” about a rising basketball star who prematurely passes away only to discover his higher spiritual purpose in helping a young girl.

Stokes signed with Mascot Publishing for a fall release of “Wings to Fly,” a children’s book, co-written by Stokes and Howard Flamm, and illustrated by Eunsoo Jeong.

TBCS is also engaged in providing all-star, hall of fame sports talent to films including “Nike,” which stars Ben Affleck and Matt Damon, and “Wilt Chamberlain,” a documentary about the NBA icon.