Garth Brooks ready for ‘family reunion’ when he returns to Edmonton in June | Globalnews.ca

Country icon Garth Brooks is coming back to Edmonton this summer and he said he has been all smiles since the Stadium Tour was announced.

“We’re so excited,” he said on Global News Morning Edmonton on Thursday. “We’re going to have a great time.”

Brooks spoke about his affection for Edmonton, likening it to a family reunion every time he visits the city.

“I’ve got the best seat in the house at any Garth Brooks concert and to be able to watch you guys sing, oh my gosh, it’s the greatest thing on the planet.

Brooks last played in Edmonton in 2017 at Rogers Place, where about 160,000 fans packed the arena for nine sold-out shows. He is set to play Commonwealth Stadium on June 25.

Garth Brooks honored in Edmonton with banner at Rogers Place

Edmonton is the only Canadian stop on the tour.

“There’s too many great times there, too many great memories there — between Calgary and Edmonton — that there’s no way you’re going to do a Stadium Tour without stopping in there,” Brooks said in a separate interview with Global News Calgary.

“People go: ‘Why do you come to Canada?’ And the answer is simple — because I’ve been there, right? That’s the greatest compliment you can pay.” 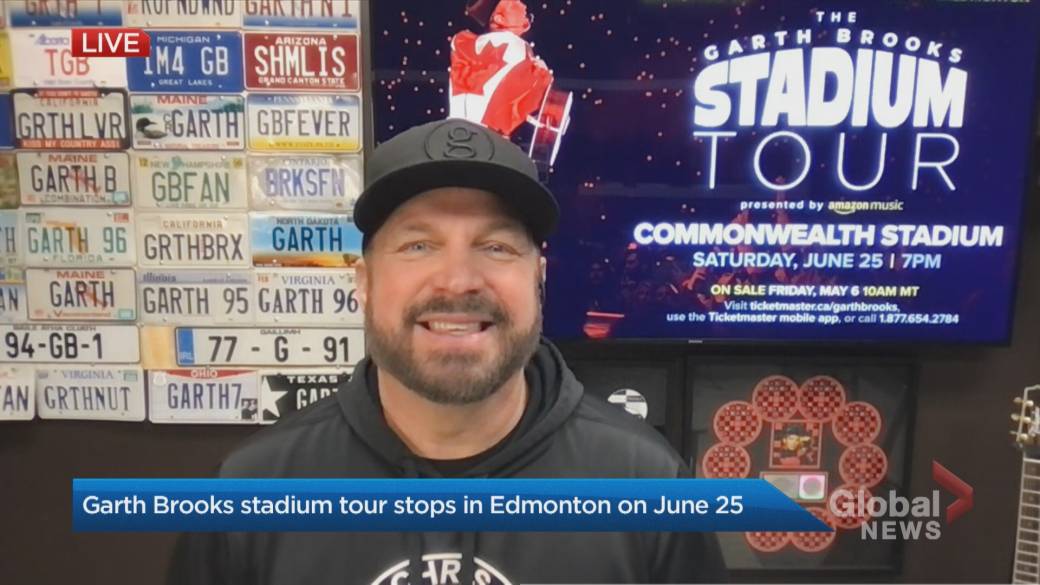 The Stadium Tour actually started in 2019, but was halted due to the COVID-19 pandemic. Brooks said canceling the tour was the right thing to do, but added he’s so much more excited for it now.

“If there’s a silver lining to all of this, the faces you see now that they’re finally back together, singing together, I think they’re more grateful, more happy than I’ve ever seen them,” he said.

“Maybe we took it a little bit for granted. I must have because I feel so much better now on stage than I ever have simply because we’re back where we belong — and that’s together.”

So what can country music fans expect from the Stadium Tour?

“It’s stupidity at high volume, is all it is. But it’s so much fun. About three or four songs it’ll hit you, you’ll go, ‘Wait a minute. This guy ain’t doing nothing, we’re doing all the work.’ And that’s right. I’ve been in this business for a while and I start the song, you finish it. I start the next one, you finish it. I can do that all night long up there.”

Brooks said he was playing in Louisiana a few nights ago and the crowd got so wild that a small earthquake was captured by LSU’s seismograph. He expects nothing less from Edmonton.

“I expect that out of Edmonton and I don’t think that’s too far for them because I’ve been there, I’ve survived Edmonton and now I’m coming back to try and put all those people we saw in nine nights in one stadium. It’s going to be fun.

“The earthquake could become a normal thing. I’m so excited.”

The director of Commonwealth Stadium previously said Brooks and his team are making the most of the venue by putting the stage at the center of the field, making more seats available for people to see the show.

Tickets for the Edmonton show go on sale to the general public at 10 am Friday through ticketmaster.