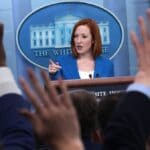 Karine Jean-Pierre is set to step in as White House Press Secretary when Jen Psaki leaves later this month.

Jean-Pierre has served under Psaki since the start of Joe Biden’s administration, and she will be the first Black and openly gay woman to take the position. The press secretary gives the President’s daily briefing and fields questions from the press.

Psaki took to Twitter to praise her successor, writing, “She is passionate. She is smart and she has a moral core that makes her not just a great colleague, but an amazing Mom and human. Plus, she has a great sense of humor.”

“One of our first conversations was about how to build a drama free team that focused on doing the job and also supporting each other while playing a role every day in rebuilding trust in government. Grateful to have had her by my side,” Psaki continued.

The outgoing press secretary said she is looking forward to seeing Jean-Pierre in the role.

“I can’t wait to see her shine as she brings her own style, brilliance and grace to the podium.”

Psaki will leave the role on May 13.