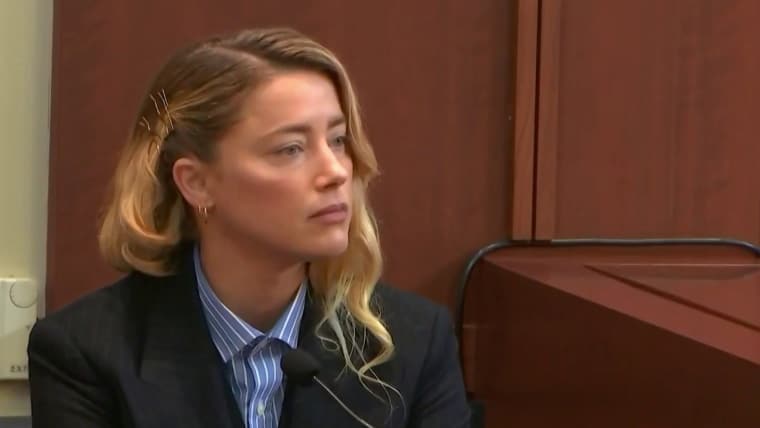 The tip jars were my tipping point. They popped up in a TikTok video showing a Starbucks drive-thru with competing jars set up at the pay window, one saying “Johnny Depp (Jack Sparrow)” surrounded by hearts and stars and another saying “Amber Heard” surrounded by frowning faces and a drawing of a turd. In the video, you can hear someone say, “Go, Johnny!” after a dollar is placed in the jar with his name on it.

The video shows so much of what’s wrong with the public’s consumption of the Johnny Depp and Amber Heard defamation trial, in which Heard took the witness stand Wednesday. It’s a disturbing case in which both parties have made accusations of domestic violence. The trial centers on a 2018 article Heard wrote for The Washington Post telling her story of having been abused by an anonymous partner—widely perceived to be Depp.

We don’t know the truth in this situation. Both sides have made upsetting accusations. The problem is the reflexive assumption that Depp is being wronged.

Depp denies all claims of abuse and is suing Heard for $50 million, seeking to prove she damaged his career with the Post piece. Heard has also denied allegations of abuse, and her legal team has countersued for $100 million, alleging that Depp has conducted a “smear campaign.”

The case should provide a sobering look at domestic violence and how it affects both men and women. Instead, the trial has turned into a circus of misogyny and delusion. I am an abuse survivor, and it’s particularly damaging to see social media pile-ons focused on a woman who did not even initially name her abuser de ella. It reminds me that when women allege abuse, they’re often put through the wringer — famous or not.

Alongside the frightening level of sexism, there’s a jocular vibe surrounding this case that’s disturbing. These are two human beings talking about one of the darkest parts of their lives, and we’re treating it as entertainment. There’s the willful conflation of an actor, Depp, with his most famous and beloved role, Captain Jack Sparrow, the charismatic pirate — blurring the lines between his real life and the public’s fantasy. And there’s the toxic fandom gone amok as people mindlessly cheer on a man who has already lost a libel trial against the British tabloid The Sun after it called him a “wife beater.”

We don’t know the truth in this situation. Both sides have made upsetting accusations. The problem is the reflexive assumption that Depp is being wronged, along with the gleeful way social media is harassing the woman who accused him of violence. Social media users even harassed a clinical psychologist testifying on behalf of Heard, filling her de ella professional Google profile with one-star reviews calling her a “liar” and “evil.”

It’s disheartening and sickening to see the meme-ification and commodification. Domestic violence is not funny. It shouldn’t spur popularity contests. It shouldn’t create an industry in which people are selling merchandise on Etsy, in which Rolling Stone reports that sellers are making items such as pins, T-shirts and coffee mugs featuring the phrase “Justice For Johnny.” It shouldn’t be a spectacle in which a woman shows up bringing two emotional support alpacas to the courthouse to cheer Depp up. It shouldn’t prompt writers to publish articles with lines like “The Johnny Depp and Amber Heard trial is the entertainment we didn’t know we needed in 2022.”

And then there are the memes. So many memes.

Memes that involve feces and intimate body parts and other lewd references to the lurid testimony, most of them putting Heard in a highly unflattering light.

Memes making light of Depp’s problem drinking by joking about the amount of wine he consumes. The phrase “mega-pint of wine” — an unfortunate turn of words by Heard’s lawyer — has been shared widely on TikTok and Twitter.

Memes celebrating Depp’s violent text messages about Heard. (Depp has said he is “not proud” of having written those texts and claims some of them were “dark humor.”)

meme about Jack Sparrow triumphing over Amber Heard, as if the defamation trial were a “Pirates of the Caribbean” sequel.

The memes are grotesque. They show us that celebrity culture blinds us and enables toxic behavior, from online bullying of anyone who questions Depp to uncritical fan worship. And those reactions indicate that women are still unfairly burdened with proving they were abused at the same time they also must prove they were “perfect” victims.

Of course, this is hardly the first time accusations of abuse have been made for social media fodder. But while other cases involving high-profile celebrities have generated their share of memes and fan support, the Depp and Heard trial feels different because of how prevalent the Depp brigade is and how antiquated the rhetoric about domestic violence has been. It’s like #MeToo never happened.

We can never really know what happened in Depp and Heard’s relationship, but how the public is consuming this trial is showing us the darkest parts of ourselves — and how we still don’t understand the dynamics and nuances of domestic violence. Often, abusers will have histories of violence, but that’s not always the case. Abusers can be kind to others while they simultaneously torment their partners. They can be charismatic, smart, funny and attractive. They can be men, women or nonbinary.

See also  KUWTK: Khloe shares a sneak peek of how she spent her 37th birthday

And survivors can be reluctant to come forward with their abuse stories for different reasons. Men often don’t like to be seen as victims or disempowered, while women are scared they will be disbelieved and then harassed. Perhaps one positive result of the public response to this case is that more men will be empowered to share their experiences with abuse. But, as gender justice advocate Farrah Khan awning Vicethe trial also “has the potential to scare victims and survivors of abuse from speaking out because they fear backlash similar to what Heard is getting right now.”

While it’s very possible that Depp and Heard both contributed to an abusive partnership, social media users don’t seem to want to consider this messiness. They seem to prefer the story about their pirate hero, the one who makes quips on the stand, the one who has entertained them for years and made their lives more enjoyable. heard, a queer woman who spoke out about domestic violence, is a destroyer of their ideals: crazy and conniving. If Depp is Jack Sparrow, Heard is Amy Dunne from “Gone Girl” in the court of public opinion.

Patricia Grisafi, Ph.D., is a freelance writer and editor. Her work by her has been featured in The Guardian, Salon, Vice, LARB, Catapult, SELF, Narratively, The Rumpus, Business Insider and elsewhere. She lives in New York City with her husband, son and two rescue pit bulls.