‘Saved by the Bell’ Revival Canceled at Peacock 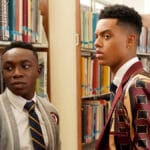 The Peacock revival of ’90s favorite “Saved by the Bell” will not be back for a third season, the streamer confirmed on Wednesday.

The second season dropped in November and won Outstanding Comedy Series at the GLAAD Media Awards on April 2, beating out such competition as “Love, Victor” and “Sex Education.”

Peacock paid tribute to writer and exec producer Tracey Wigfield, as well as eps Franco Bario and Peter Engel and Universal Television in the following statement on Wednesday:

“We are so proud to have been the home of the next iteration of ‘Saved by the Bell’ for both new and OG fans. Saved by the Bell has been a cultural mainstay for more than 30 years and the new series, led by Tracey Wigfield’s superfan enthusiasm and signature witty humor, seamlessly continued the show’s legacy, all while allowing more audiences to feel seen. We’re grateful to Tracey, Franco Bario, our partners at UTV, the beloved cast, and the fans who have continued to champion one of the most iconic shows of all time.”

“Saved by the Bell” will continue to stream on Peacock.