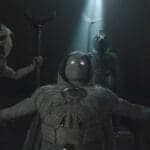 Those who tuned into the latest Marvel Disney+ series “Moon Knight” were largely surprised to discover that the Oscar Isaac-led show was not only devoid of cameos from other Marvel Cinematic Universe characters, it barely even mentioned events that happened in other films and shows .

This wasn’t a complaint per se, but the Disney+ Marvel shows the preceded “Moon Knight” – “WandaVision,” “The Falcon and the Winter Soldier,” “Loki,” “What If…?” and “Hawkeye” – all featured characters who already existed in the MCU and had plot points that connected to events that were occurring or had already occurred in the increasingly complicated MCU timeline.

“Moon Knight,” however, was a six-episode deep-dive into the psyche of Isaac’s Marc Spector, a man suffering from Dissociative Identity Disorder who has also sworn an oath to an ancient Egyptian god that gives him superpowers.

And as head writer Jeremy Slater and the writers room started building out the story of “Moon Knight,” connections to the MCU started falling away.

“There are little connectivity threads to the MCU,” executive producer Grant Curtis told TheWrap in a recent interview. “As you know there’s the mention of Madripoor in Episode 3, and there are other mentions that do tie it to the MCU so we are in there. But it wasn’t a conscious effort to step away from the MCU – because we don’t – but when we were in the writers’ room with Jeremy and the team, it was what’s the best journey? What’s the best character story we tell with Mark and Steven and then Jake at the end? And it really turned out the more we focused on them and making that journey as rich as possible for the audience, that connectivity just didn’t naturally flow with the narrative that we were telling.”

That said, Curtis admitted that as a producer his knee-jerk reaction was initially to dream of what other characters could be brought into the fold. But as they focused on telling “the best version of ‘Moon Knight’ possible,” zeroing in on Marc/Steve/Jake’s story felt most important.

And since “Moon Knight” is so disconnected, that means that the character can really be folded into the larger MCU anywhere. Moreover, if you’ve never seen another MCU offering, you can jump into “Moon Knight” cold and still understand what’s going on.

“I think what is interesting about ‘Moon Knight’ is because you don’t have all of that connectivity, you can drop into it as your first MCU experience and you totally get the journey,” Curtis said. “You totally get the story. Whereas sometimes when you have more connectivity, there’s a little bit more homework you have to do. I don’t think you have to do that homework on ‘Moon Knight.’ I think the story is just as fascinating. Whether you’ve seen every other MCU offering or if this is your first deep dive.”

As for what’s next, Curtis was tight-lipped on a potential Season 2. “Great question for Kevin Feige,” the producer said when asked if conversations about Season 2 were ongoing. But Curtis did express enthusiasm for continuing the story – especially after Marc’s additional personality Jake Lockley was introduced in the credits scene. “We’ll see where Jake Lockley goes from here,” Curtis said, adding, “Moon Knight, in my opinion, could go anywhere in the MCU. He merges into a lot of different storylines.”

Here’s hoping this isn’t the last we’ve seen of Oscar Isaac in the Marvel Cinematic Universe. 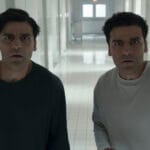