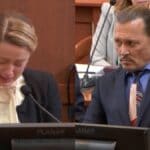 Amber Heard’s representatives said in a statement released Thursday that Johnny Depp’s defamation claim is “falling apart” due to his counsel’s “recycled approach of attacking the victim” and “refusing” accountability.

The comments come on the “Aquaman” actress’ second day of testifying in the high profile trial, in which she described facing gross sexual assault and abuse from Depp. While breaking down in sobs, Heard told the jury that she had “never been so scared in my life.”

The full statement is as follows:

“As evidenced by the statement just released, Mr. Depp’s defamation claim is falling apart so rapidly that his counsel are turning from prosecutor to persecutor.

They boast that Mr. Depp’s story has not changed. If so, since he lost the Domestic Violence Restraining Order and he resoundingly lost the libel case in the UK, perhaps he should consider a new strategy rather than the recycled approach of attacking the victim, and refusing to take responsibility for his own conduct.

If Mr. Depp was truly innocent, why has he repeatedly apologized to Ms. Heard and promised to put the “monster away for good.” One of Ms. Heard’s disappointments is Mr. Depp’s inability to distinguish fact from fiction — a malady which appears to have spread to his legal team from him. That same team is so panicked they are fighting tooth and nail to prevent compelling evidence and photos from being introduced. Small wonder Mr. Depp does not have the fortitude or courage to even look at Ms. Heard at all throughout the proceedings — as he could not in the UK trial — and, instead he doodles and snickers.

Mr. Depp’s behavior in this trial has been as pitiful as it was in their marriage. Apparently, they feel they must double-down on their demonstrably losing two-part strategy: distract the jury and demonize the victim.”

Depp’s attorneys did not immediately respond to a request for comment from TheWrap.