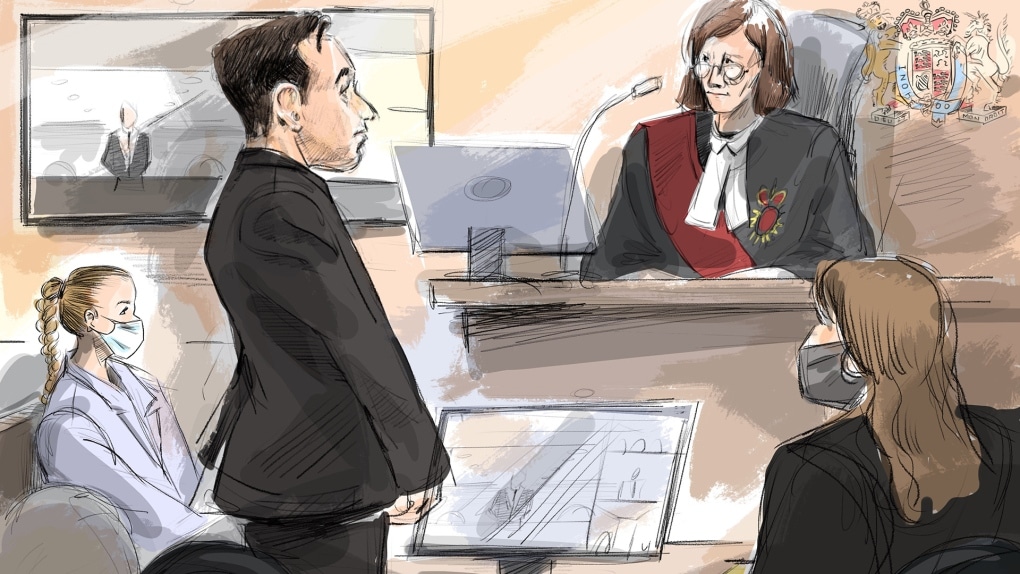 A young woman is testifying that Canadian musician Jacob Hoggard turned into a “monster” after bringing her to his hotel room when she was 16.

The woman, who is one of two complainants in Hoggard’s sex assault trial, at one point broke down in tears this morning as she described her encounter with the singer on Sept. 30, 2016.

She told the court she tried to fight off Hoggard for several hours as he kissed her, then pushed her on the bed and repeatedly raped her vaginally and orally, and attempted to do so anally.

The young woman said she was “crying and telling him to stop,” and that her mind eventually “shut down” as she focused on surviving the incident.

Prosecutors allege Hoggard, the frontman for the rock band Hedley, violently raped two women after bringing them to Toronto-area hotels in separate incidents in 2016. Both complainants had traveled from out of town to see him.

An agreed statement of facts says Hoggard had a “sexual encounter” with each of the complainants on the days they came to his hotel.

The singer has pleaded not guilty to two counts of sexual assault causing bodily harm and one of sexual interference, a charge that refers to the sexual touching of someone under the age of 16.

Earlier in her testimony, the complainant described meeting Hoggard in a hotel parking lot after an out-of-town concert she attended at age 12, and starting to communicate directly with him after a meet-and-greet event when she was 15.

The woman said Hoggard also sent her romantic messages, saying he loved her and saw a future with her. “It felt almost like a relationship,” she told the court Thursday.

A few weeks after they began texting, he arranged for her and two friends to come see Hedley in Toronto and gave them backstage passes, she said.

Once backstage, she said Hoggard touched her buttocks repeatedly, which made her uncomfortable. She said she tried to move away or grab his wrist from her in the hopes that he would understand she wanted him to stop.

In testimony Friday, the young woman told the court they tried to arrange a day of shopping and sightseeing in Toronto at some point in the weeks that followed, but the plan fell through.

Over the summer, she and Hoggard kept in touch, and he even called to wish her a happy birthday when she turned 16, she testified.

“When he called you on your birthday, did he know how old you were turning?” Crown attorney Kelly Slate asked.

They eventually rescheduled their meeting for a PA day in September, and the woman said she expected they would stick to the original plan of shopping, lunch and sightseeing, adding she thought the other band members and their manager would be present.

Even after she was brought to her hotel, the woman said she believed they were only meeting there and would be going elsewhere.

In its opening statement Thursday, the Crown said the second complainant met Hoggard in November after crossing paths with him on Tinder while Hedley was in Ottawa.

Later that month, they made plans to meet in Toronto, and the Crown alleges Hoggard raped her “over and over” during an hours-long encounter in his downtown hotel.

Both complainants were left bleeding, bruised and sore, prosecutors allege. Neither can be identified under a publication ban.

This report by The Canadian Press was first published May 6, 2022.