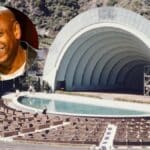 Kevin Hart has no problem with the fact that Dave Chappelle’s security team got a bit physical with the man who rushed the stage and tackled the comedian earlier this week. In fact, Hart would argue that it’s an effective method of deterrence.

On Tuesday night at the Hollywood Bowl, a person with a makeshift weapon managed to rush the stage and tackle Chappelle mid-set. Fortunately, the comedian was apparently not injured, continued his set and then joked about it later, according to reports. But the attacker himself was caught by security, and was reportedly escorted from the show in an ambulance with a broken arm.

On Thursday, Hart appeared on “Jimmy Kimmel Live!” and got into the incident with the late night host. For Hart, leaving physical repercussions for the attacker was a strong deterrent for anyone who might consider rushing a stage in the future.

“Somebody getting their ass whooped sends a message to other people, do you know?” the comedian told Kimmel. “’I was thinking about doing that, but after seeing that, I don’t want to do that.’”

Because, for what it’s worth, Hart wasn’t necessarily surprised that someone rushed the stage in the first place.

“I think that’s the world that we’re in right now,” he said. “There’s a lot of lines that have gotten blurred. And sometimes you got to take a couple steps backwards to take some steps forwards.”

In addition to praising Chappelle’s security team, Hart also applauded Chappelle himself for keeping his cool and continuing on with his set.

“Dave went back after that and finished doing the show,” Hart added. “Didn’t let that thing be a big thing. He quickly moved on from it and got back to doing comedy. And that’s what a professional does. Ultimately, you know, these moments of unprofessionalism should not break professionals.”