Movie reviews: ‘Doctor Strange in the Multiverse of Madness’ is more than just interdimensional shenanigans 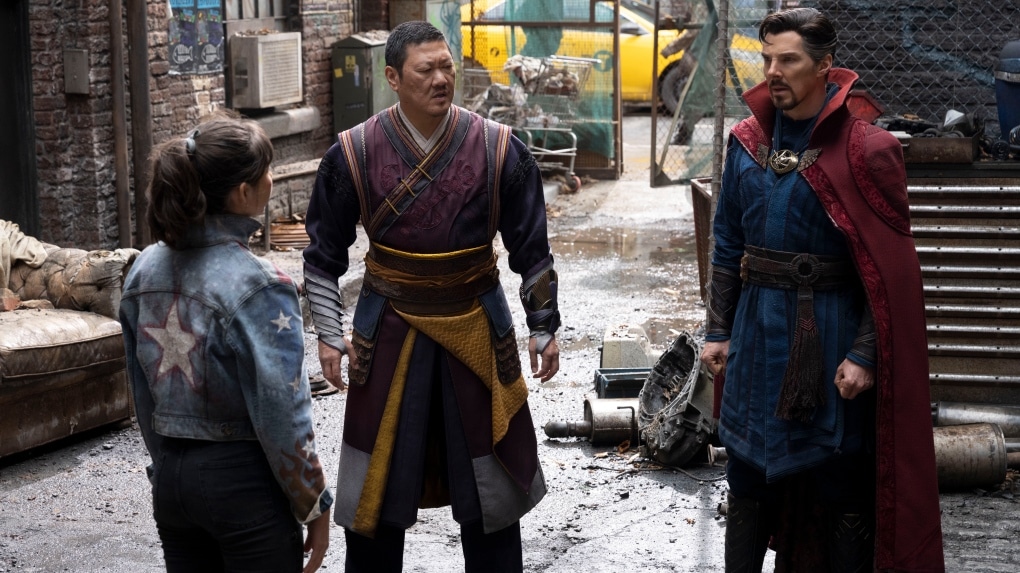 DOCTOR STRANGE IN THE MULTIVERSE OF MADNESS: 3 ½ STARS

This image released by Marvel Studios shows, from left, Xochitl Gomez as America Chavez, Benedict Wong as Wong, and Benedict Cumberbatch as Doctor Strang in a scene from “Doctor Strange in the Multiverse of Madness.” (Marvel Studios via AP)

The “Doctor Strange” movies are the trippiest in the Marvel Cinematic Universe. The mystical superhero’s introduction — 2016’s “Doctor Strange” — was a kaleidoscopic mix of images and ideas. The new film, “Doctor Strange in the Multiverse of Madness” starring Benedict Cumberbatch and now playing in theaters, kicks it up a notch. With a visual style that suggests MC Escher on an acid trip, it is a hallucinogenic ride that will make your eyeballs spin.

The action begins in Dr. Stephen Strange’s (Cumberbatch) universe with the introduction of America Chavez (Xochitl Gomez), a teenager with the ability to navigate the multiverse and access portals into alternate realities. In the search for her parents of her, she has explored 73 universes, each with their own unique sets of rules, all the while pursued by a demon who wants to steal her powers from her.

This is not sorcery, Strange says. As old Blue Eyes once sang, it’s witchcraft, so who better to consult than Wanda (Elizabeth Olsen), a former Avenger and powerful practitioner of witchcraft?

He’s looking for advice that will help him save America, but instead is sent off on a wild and dangerous trip into a series of alternate realities to fight a power that threatens to subjugate the entire multiverse.

“Doctor Strange in the Multiverse of Madness” begins with a bang. A loud and proud action scene kicks things off with an exaggerated HP Lovecraft creature terrorizing Chavez. It sets the wild and wacky tone that applies to most of the picture. A mix of action, horror and comic book comedy, it recalls the sweet spot that made director Sam Raimi’s “Evil Dead” movies such a blast. Raimi brings a kind of anarchy that is missing from the other, carefully controlled Marvel films and when it is fun, it’s really fun. There’s even a battle of the bands in a musical showdown that is equal parts ridiculous and rad.

But there is much more to the story than interdimensional shenanigans.

At its heart, “Doctor Strange in the Multiverse of Madness” isn’t a story about magic, it’s a tale about the things we do for love. Whether it is Wanda’s search for family, ably brought to life by Olsen’s poignant performance of her, or Strange’s attraction to Christine Palmer (Rachel McAdams), this story has a strong, beating heart.

Unfortunately, it also has a bumpy, even script. As it careens toward the Marvel friendly climax, it loses steam as the action becomes muddied and the script begins to sew up any loose ends left dangling across the universes.

“Doctor Strange in the Multiverse of Madness” doesn’t have the weight of “Everything Everywhere All At Once,” another recent examination of the multiverse, but despite its unevenness, it’s a good and sometimes gory time at the movies. 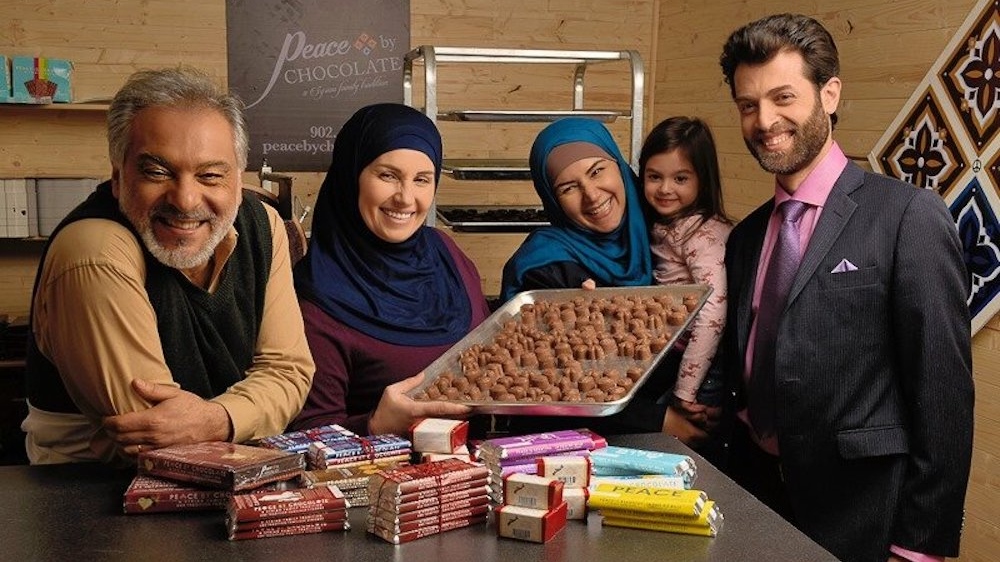 It should not come as a surprise that a movie called “Peace by Chocolate” is cloyingly sweet. The based-on-a-true-story of Syrian Civil War refugees settling in small town Nova Scotia is played out in broad strokes but, despite its wintry Antigonish setting, is a warm-hearted film.

When we first meet Syrian born Tareq Hadhad (Ayham Abou Ammar) his dreams of becoming a doctor are sidelined by the war in his home country. His family’s chocolate factory has been destroyed, and the family is forced to flee. Tareq relocates to Nova Scotia to start anew, while a visa is prepared to bring his parents from him, father Issam (Hatem Ali) and mother (Yara Sabri) in from Lebanon.

Welcomed by the locals, Tareq settles in, but aspires to move to Toronto to study medicine. However, when the family chocolate business takes off in Antigonish, Tareq is torn between his dreams and family duty. “I didn’t have superheroes growing up in Syria,” he says. “I had doctors. They save lives. They command respect. They don’t make sweets.”

“Peace by Chocolate” tackles some big topics. There is displacement of refugees, racism and aspirations, but despite some tension in the storytelling, it has a tendency to lean into the feel-good aspects of the story. The reliance on the saccharine aspects sucks away some of the gravitas inherent to the tale.

Having said that, “Peace by Chocolate,” despite its very specific characters and setting, is a universal, underdog story about following your dreams and overcoming adversity. On that level, it works because of the likable performances that draw the audience into the situation. It’s an unabashed, feel-good movie, one that focuses on the family’s triumphs as much as their tribulations.

“Peace by Chocolate” may not be as complex as the delicious chocolate Issam whips up, but it does have its pleasures. 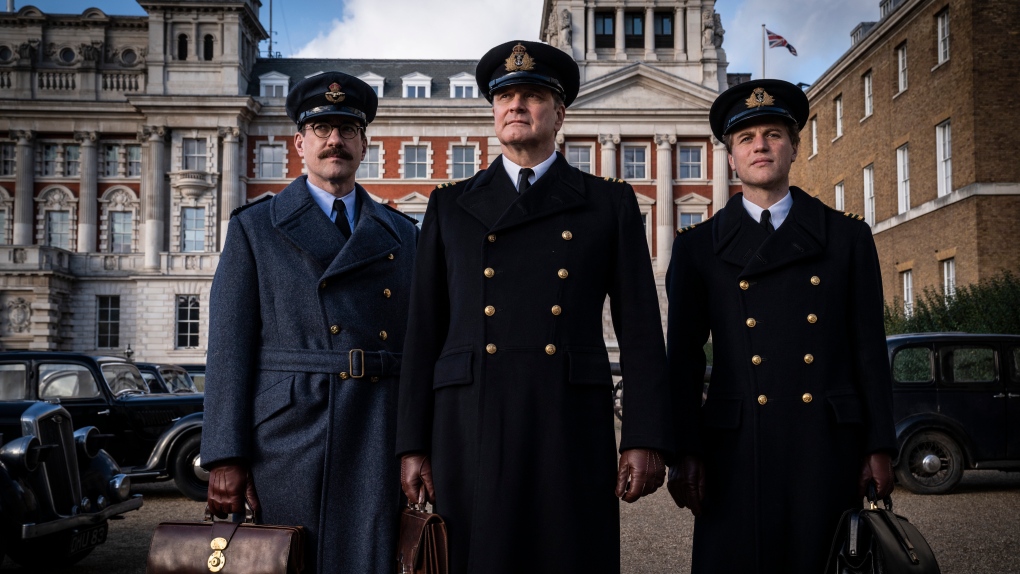 Based on a British Second World War deception operation to camouflage the 1943 Allied invasion of Sicily, “Operation Mincemeat,” now playing in theaters and moving to Netflix on May 11, is an entertaining retelling of a little-known plan to break Hitler’s grasp on Europe.

Based on historical records, the movie details a plan so outlandish it sounds as though it sprung from the fanciful mind of a screenwriter. That the plan was, in part, hatched by a young Ian Fleming (Johnny Flynn), who would later go on to create the outlandish James Bond series of spy novels, would seem to be another flight of the imagination, but even that flourish is based on fact.

The plan, nicknamed Operation Mincemeat, involved tricking Hitler into believing the Allies planned to invade Greece, not Sicily. But how to pull it off?

QC-turned-Lt.-Cmdr. Ewen Montagu (Colin Firth) and MI5 agent Charles Cholmondeley (Matthew Macfadyen) marshal an audacious disinformation plan to drop a dead man off the coast of Spain, where the Nazi spy chain begins. In the pockets of the corpse’s uniform are “wallet litter” — faked love letters, military ID, etc. — and in this case, “classified” military correspondence indicating the Allies were about to invade Greece. If that information falls into German hands and distracts them, it will allow a full-scale Allied invasion of Sicily.

“Operation Mincemeat” is a spirited recreation of the meticulous planning that went into the scheme to fool the Fuhrer. Director John Madden finds the suspense, the espionage and even the romance in the situation. The first two elements work well, creating a forward momentum that builds excitement as the running time ticks by. The romance between Montagu and Jean Leslie, played by Kelly Macdonald, is less convincing and feels wedged in.

Better are the comedic aspects. While some of the dealings with the dead man evoke memories of “Weekend at Bernie’s,” most of the laughs come from the absurdity of the situation, and feel organic to the story.

A welcome addition to the stranger-than-fiction genre, “Operation Mincemeat” is a well-appointed, well-crafted period piece that avoids the stoicism of other war time, espionage thrillers. 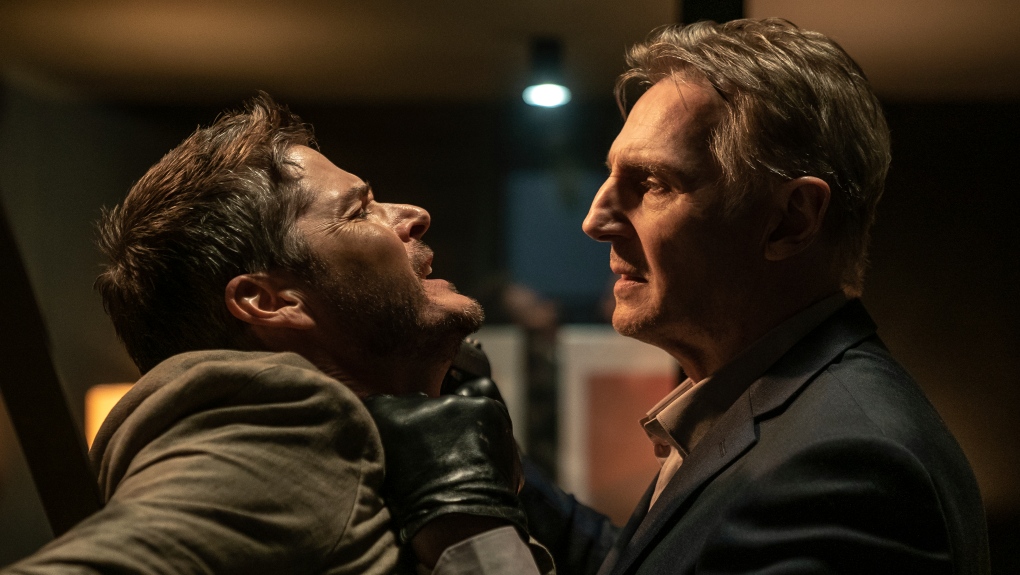 The release of “Memory,” a new Liam Neeson action movie, now playing in theaters, marks the star’s 14th anniversary as an action star. 2008’s “Taken” kicked off the “special set of skills” phase of his career, usually playing tough guys who shoot their way through one last job.

“Memory” continues the actor’s unbroken string of shoot ’em ups, but with a twist. He still has a special set of skills, which he deploys to deadly effect, but this time, there is a ticking clock.

Neeson is Alex Lewis, an assassin for hire who prides himself on the precision of his work. He is brutally efficient, but lately there have been slip ups. Nothing major, but his memory of him is n’t what it once was, and the quality of his work is suffering.

As his memory fades, Lewis finds himself in the crosshairs of FBI agent Vincent Serra (Guy Pearce, who starred in “Memento,” one of the best thrillers involving memory ever made) and Mexican intelligence. Worse, when he turns down a job from ruthless crime human trafficking boss Davana Sealman (Monica Bellucci) to kill a child, she vows to kill him. “I’ve done crazy things,” he says. “But you don’t hurt children, ever.”

To stay alive and help bring Sealman to justice, he must piece the shattered pieces of his memory back together. “We all have to die,” he says. “What’s important is what you do before you go.”

Directed by veteran James Bond filmmaker Martin Campbell, “Memory” is a well-constructed thriller, but has a generic, workman-like feel. The characters feel as though they’ve been cut-and-pasted from other, better movies, leaving the viewer with a feeling of déjà vu. We’ve been there, done that and despite the level of performances from a cast of old pros, the film is sunk by a labored script.

The story of a man trying to undo the bad he has done in his life as his memory fades is a compelling one, but unfortunately, in the end, “Memory” is a forgettable action flick.