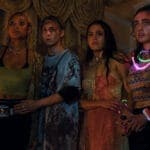 Pete Davidson addressed his very public feud with Kanye West during a stand-up set at the Netflix Is a Joke comedy festival, and Netflix has now made the clip of Davidson’s set available online. The jokes came as part of the sold out “Pete Davidson Presents: The Best Friends” show at The Fonda Theater on April 29.

“I’ve had a really weird year,” Davidson begins, before launching into a few stories relating to his public falling out with West over dating West’s ex-wife Kim Kardashian.

“I had an AIDS scare this year,” Davidson said. “And you’re like ‘Pete wow what’s going on in your life? Are you sharing needles? Are you doing heroin? Are you having tons of unprotected sex?’ No, Kanye told me I have AIDS.”

The joke was a reference to to rumor spreading earlier this year that West was telling people that Davidson had AIDS, with Davidson seemingly confirming the incident in this stand-up set.

“He’s a genius so I was like, ‘Oh f—k. I better call my doctor. The guy who made ‘College Dropout’ says I have AIDS.”

Davidson then imagined a scenario in which West tried to integrate himself back into the lives of Kardashian and their children: “Does anybody else secretly hope that Kanye pulls a Mrs. Doubtfire? I come home one day and they’re like, ‘This is the new housekeeper’ and he’s like, ‘What’s up fam?!’”

The “SNL” alum also added that the situation is so strange that no one is able to offer him advice.

“It’s a really weird thing to go through, because people try to give you advice but even friends that are older than you are like, ‘I don’t know. It looks pretty bad bro. Good luck. Sorry. Here if you need.’ But like no advice.”

See also  Lose Yourself: Deciphering Some Of The Lyrics From Eminem's Classic And How They Connect To 8 Mile

Towards the end of the clip, Davidson addressed the fact that his friend Jack Harlow made an appearance on West’s new album, explaining why there’s no falling out between the two.

“Kanye put him on his new album even though I’ve been friends with him for like two, three years, he did it anyway and people come up to me like, ‘How does that make you feel? Does that bother you? Does it get under your skin?’ and I’m like, ‘No, he’s a rapper. That’s his field of him That’s what they do.’ That doesn’t hurt my feelings. It would hurt my feelings if I saw like Bill Burr at Sunday Service.”

Davidson recently stepped out with Kardashian at the 2022 Met Gala, taking their relationship public in a very big way.

Watch the clip of Davidson’s Kanye West jokes in the video above.