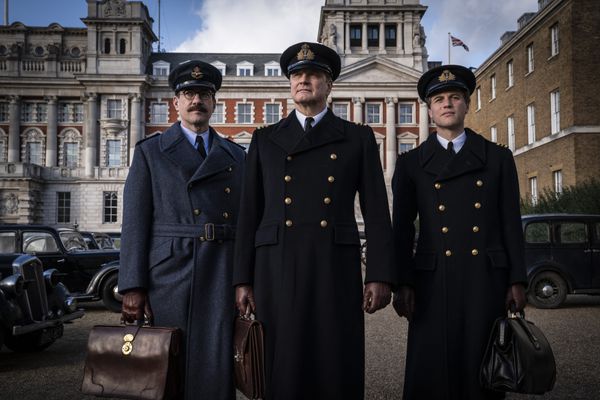 You know you’re watching an exceptionally British movie when you have not one but two Mr. Darcys going head to head. And while the new film Operation Mincemeat is not wholly engineered around the wink-wink casting of both Colin Firth (1995′s Pride and Prejudice) and Matthew Macfadyen (2005′s Pride and Prejudice), the pairing certainly doesn’t hurt, giving the Second World War espionage thriller an exceptionally charming Austen-esque edge.

Based on one of modern warfare’s greatest intelligence ruses, director John Madden’s film follows Britain’s finest spies as they attempt to keep the Allied invasion of Sicily a secret. Their trick? Convince Hitler that Allied soldiers are instead headed elsewhere – by planting the drowned corpse of fictional British officer William Martin off the coast of Spain with faux “secret” documents tucked in his person suggesting an imminent invasion of Greece and Sardinia. The first challenge, of many, was finding a freshly dead body who no one would miss to act as the fallen Martin – as well as forging official documents, creating a believable backstory for the made-up soldier, and on and on.

The many stumbling blocks, setbacks and eventual (spoiler alert for a three-quarters-of-a-century-old war) triumphs of Operation Mincemeat are handled by a deft crew of real-life stiff-upper-lip types played by the finest UK actors working today.

There is Firth’s Ewen Montagu (whose family life is crumbling as the war machine rages on), Macfadyen’s Charles Cholmondeley (who lives in the shadow of his dead war hero brother), Kelly Macdonald’s Jean Leslie (whose younger-years photo was tucked into Martin’s uniform, to help convince the Axis that this wholly imagined man led a life full of real romance and tragedy), and Jason Isaacs’s naval gruff admiral John Godfrey (who was said to be the inspiration for James Bond’s superior, M).

Speaking of Bond: the film is narrated by a young Ian Fleming himself, here played by Johnny Flynn with a dashing kind of energy – and whose presence rounds out the movie’s best running gag about how most every British officer fighting the war was busy with a side-gig writing a spy novel loosely based on theatrics.

Madden, whose last film, the cynical and aggravating 2016 political thriller miss sloanesuggested that the filmmaker had abandoned the gentler and smooth tenor of such earlier work as Mrs Brown and Shakespeare in Love, hits all the expected notes here with neither fuss nor circumstance. The Brits get the job done, the courage of brave men gets rewarded, and whatever wartime tensions arise are handled with both care and caution. Think of such similar home-front war stories as The Imitation Game, Their Finest, Dark Hour, and Firth’s own The King’s Speech and you’ll get the idea – as well the algorithmic “what to watch next” suggestions, which should pop up the moment you finish watching Operation Mincemeat on Netflix.

Or to use another Her Majesty’s analogy: Watching Madden’s film is akin to sipping a strong cup of tea in a finely appointed study while casually thumbing the pages of an early Fleming novel – a pure and easy and highly British pleasure. I’ll rate it four Vs for Victory.