Selena Gomez to Host SNL on May 14 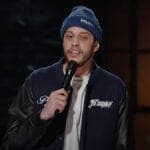 Selena Gomez is taking over for the penultimate episode of “Saturday Night Live” Season 47.

The “Only Murders in the Building” star will be hosting the late night show on May 14, ahead of the premiere of Season 2 of the hit Hulu show next month.

While this is her first time hosting, Gomez has been the musical guest on “SNL” previously.

The musical guest for Gomez’s episode is also an “SNL” newbie. Post Malone will be taking the stage for the first time that night. The Grammy-nominated artist’s new album, “Twelve Carat Toothache,” is out June 3.

The pair will follow Benedict Cumberbatch, who is hosting the May 7 show. He’s joined by musical guest Arcade Fire.

The host and musical guest for the final episode of “SNL” Season 47 have not yet been announced, but the season finale airs May 21.

In addition to the live broadcast on NBC, “SNL” will stream the remainder of the season live on Peacock at 11:30 pm ET/8:30 pm PT.