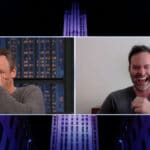 Seth Meyers may not be a Milli Vanilli fan, but he’ll take them any day over Senators Ted Cruz and Lindsey Graham. According to the late night host, there’s probably “no duo in history” that is worse than those Republicans.

As part of his “A Closer Look” segment on Thursday night, Meyers touched on the leak of a Supreme Court draft decision overturning Roe v. Wade this week, mocking Republicans for trying to keep the focus on the leak itself, rather than the overturning of women’s rights.

Meyers specifically called out Cruz and Graham, playing news clips of both in which they both argue that the clerk who leaked the documents should be investigated and prosecuted.

“There is no duo in history worse than Ted Cruz and Lindsey Graham. You know who was a much better duo? Milli Vanilli,” Meyers joked. “Or, as they’re known in Supreme Court parlance, ‘Milli v. Anilli.’”

Meyers then called back to last year, when Cruz fled Texas during a massive winter weather emergency to go to Cancun, which he later tried to blame on his daughters.

Meyers sniped: “Next time Cruz flees his state during a weather emergency, I’m betting he’ll…” — just as Milli Vanilli’s “Blame It On The Rain” started playing.

You can watch Meyers’ full segment in the video here and above.