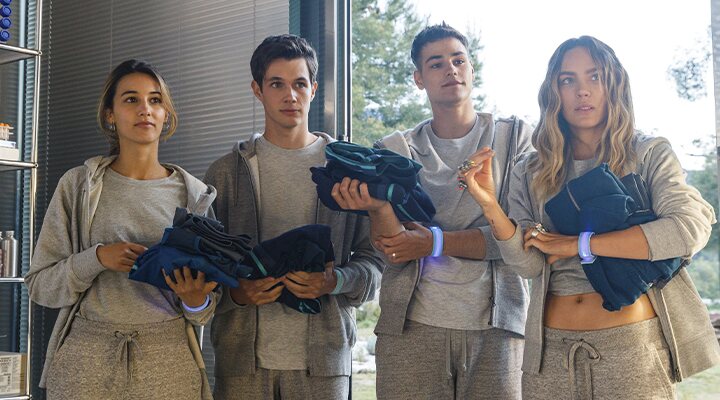 ‘Welcome to Eden’ arrives on Netflix this Friday, May 6. The series, with which the streaming platform targets the youth audience again, narrates how several teenagers are invited to a secret party on a paradise island where they will be held captive by a sect. Taking advantage of this theme, we interviewed its protagonists and we played with them to design their ideal paradisiacal party for us. And the answers were the most varied and crazy.

First of all, we made them design their perfect playlist for a party, where they mentioned a lot of rock, reggaeton or songs by Ana Mena and Belinda, the two musical stars that participate in this Netflix production. In addition, Diego Garisa revealed that on the set they had a joint playlist full of reggaeton with songs like ‘Daikiti’ by Bad Bunny.

When asked how partying they are, actresses like Lola Rodríguez did not hesitate to recognize how much she loves the party and that without hesitation they would stay until the end. Others like Ana Mena positioned themselves in the middle ground and Amaia Aberasturi, the great protagonist of ‘Welcome to Eden’, admitted that the party does not go much with her, that she is a very homely person.

However, they also clarified that it all depends on the company, so we did not hesitate to ask which actors or actresses from the series they would like to attend this paradisiacal party with. In addition, just as the festival they attend in the series is attended by a famous guest artist, played by Belinda, we wanted to know which great celebrity they would like to see partying. In the responses they mentioned singers like Rosalía, actresses like Cate Blanchett, a crazy and impossible crossover between Anitta and Lola Flores and even personalities like Carmen Lomanato which Ana Mena dedicated a few words of admiration.

How would they react to an invitation to Eden?

Appreciating the starting point of ‘Welcome to Eden’, where the protagonists receive a mysterious invitation to a party on their mobile phone, we wanted to know how the cast of the series would react if they received a similar message. Would they go without hesitation? Would they think about it? Would they try to find out? In addition, we try to know more details about the production of the series, about the necessary training for the action sequences or about the preparation and construction of the characters.

The evil leader of the Eden sect

Amaia Salamanca is another of the great protagonists of ‘Welcome to Eden’, who plays the evil villain Astrid. To learn more about this mysterious leader of the Eden sect, we bring you an exclusive clip where he schemes his plans against the young protagonists who are trapped in that world that he has secretly created on an island.

‘Welcome to Eden’ is available on Netflix from May 6