To 3D Or Not To 3D: Buy The Right Doctor Strange In The Multiverse Of Madness Ticket 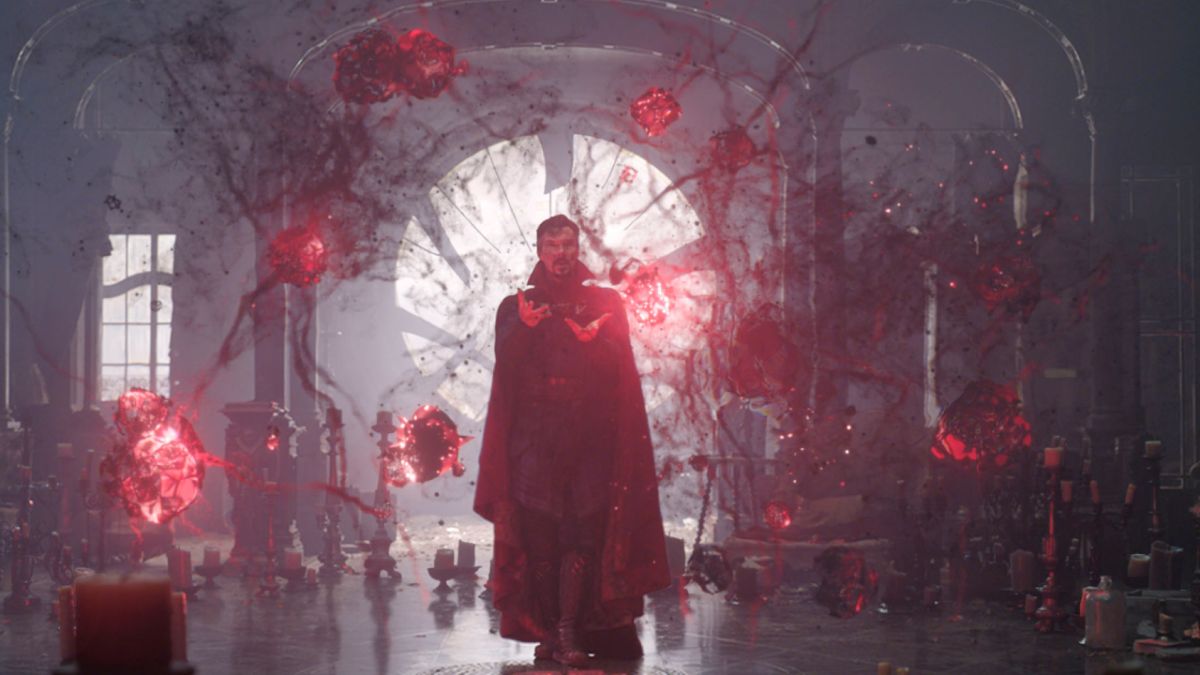 Wow, has it really been that long since we’ve dusted off the glasses? One moment you’re reviewing how well 3D worked for Spider-Man: No Way Home, and before you know it, it’s time to dive back into the Marvel 3D well. After all of the hype and waiting that’s led us to the release of Doctor Strange in the Multiverse of Madness, it’s finally time to step back into the Marvel Cinematic Universe’s big screen component. Which means that it’s also time to add another entry into our To 3D Or Not To 3D archive, thanks to the good doctor himself.

If you’re looking for spoiler-free commentary on how director Sam Raimi’s return to the world of comic adaptations fares as a movie experience, you can find that in our own Eric Eisenberg’s official review. Consider it another branch to the multiverse that is discussing the full Doc Strange 2 experience. Here and now, we’re going to slip on our 3D glasses, and talk out whether Benedict Cumberbatch’s next solo chapter is worth the extra money, or if you should save it for some Pizza Poppa’s Pizza Balls on the way home.

Putting aside the business practice of regularly releasing comic films in 3D for a profit boost, the visuals on display in the trailers for Doctor Strange in the Multiverse of Madness definitely suggest a potentially eye-popping time at the movies. The precedent for that notion goes further back as well, since 2016’s Doctor Strange used 3D to an impressive extent. Not only is this movie absolutely fit for 3D, it shows that Sam Raimi was born to make 3D movies

Sadly, the screening observed for Dr. Stephen Strange’s latest adventure was not in IMAX or large format 3D due to the limited nature of showtimes. That doesn’t dim the shine on the standard 3D presentation though, as you’ll see throughout my evaluation. Suffice it to say that I’m ready to revisit this one in IMAX 3D to see if I can spot any difference. Also, this is one hell of a ride.

In the screenings observed for both Spider-Man: No Way Home and the 3D presentation of last November’s Eternals, the P&E seemed to have taken a dive in quality for the MCU. This was even more disappointing, as Shang-Chi and the Legend of the Ten Rings looked like the format was going to rally. As if that wasn’t enough pressure on Doctor Strange in the Multiverse of Madness’ 3D conversion to deliver, Marvel Studios president Kevin Feige made the following comments about the matter at the premiere’s red carpet:

That definitely sounds like history repeating itself, as that same scenario of concern/reaction came up in my 3D review for Doctor Strange. You are Doc Strange 2 worth that sort of hype? Yes, yes, absolutely yes! The care and love is back in MCU 3D, and Multiverse of Madness has a lot to show off to anyone who wants to take the trip.

Hats off to Stereo-D for its conversion work on this movie. I know I’ve bagged on some of the studio’s work in the past, but the dedication to making this trip all the stranger in 3D needs to be highlighted. Much like Sam Raimi gets to go all out with his bag of tricks on Doctor Strange in the Multiverse of Madnessthe Stereo-D folks show up to leave it all on the field.

Doctor Strange in the Multiverse of Madness doesn’t waste any time getting started, and the 3D presentation keeps pace with that sort of energy. From America Chavez’s opening sprint with an alternate Strange to obtain the Book of Vishanti, third-dimensional thrills are already in play, hitting every aspect you’d want in a 3D movie. Yes, dear reader, that includes the often underplayed Before the Window factor, which is well served in this picture. Not only is it an eye-popper, but there’s literally a scene of eye-popping that is shown early on.

much like Doctor Strange, the visual representation of spells in the sequel continues to stun with its projection into the audience. What’s more, full-on battle sequences with monsters, debris and atmospheric effects help draw a stunning picture across three dimensions. There’s even a full-on battle sequence with musical notes that fly towards the camera; and Sam Raimi doesn’t pull his visual punches by cutting before the gag. If you didn’t think you were going to flinch watching this movie, just wait until you’re introduced to the Souls of the Damned!

no matter where Doc Strange 2 hangs its hat, the depth drawn in its image is present to enlarge the world on screen. When Stephen catches up with Christine on her wedding day, taking a peek into the background reveals the depth that makes the venue fully realized in 3D. It might be easy to make a multiversal gap junction feel limitless, but getting a single conversation in a more standard setting to stand out is a plus. There are some truly Sam Raimi transitions, as well as some brilliant camera angles that see characters looking down at objects and surroundings, all of which only pop more brilliantly because of this aspect.

The standard hallmarks are also present in Doctor Strange in the Multiverse of Madness’s Beyond the Window component. Scenes full of people contain the spatial reasoning that allows rows of wedding guests to stand out amongst each other. Also, figures on screen are properly separated from their environments, so when America Chavez is captured in a plexiglas cube, you really feel that cube’s presence. As the Before/Beyond the Window segments occupy two sides of the same 3D coin, it’s marvelous when they both align so well.

If the 3D format were to have an arch-nemesis, it would have to be the Brightness factor. Slipping on tinted lenses automatically dims any picture, no matter how bright, to a certain degree. As such, it’s important for theaters to maintain the projectors properly and ensure that the rigs are calibrated before showing a 3D movie like Doctor Strange in the Multiverse of Madness. Because of that, your mileage may vary with any 3D movie in this respect; so it’s important to choose a theater you trust to handle such showings properly.

With all of the usual caveats out of the way, Doctor Strange’s sequel was as clear and crisp as anything in the viewing that was observed for this evaluation. Keep in mind, there are just as many scenes in darkly lit surroundings with subdued color pallets as there are sequences where our protagonists become vibrant, multiversal paint. Throughout those circumstances, the look of the movie doesn’t dull or dim past what the situation calls for.

With great 3D powers comes great 3D responsibility, as the image you’re being shown has to be manipulated to a certain degree to get that third-dimensional punch. This is why when you remove your glasses, or if a theater happens to start a 3D showing without proper calibration, you’ll notice that what you’re seeing is a blurry mess. However, the blurrier that mess is, the better it usually is with the 3D alignment that comes from wearing those glasses. Doc Strange 2 doesn’t skimp on this blur, and you can see it easily when you flip your facial furniture off during any point in the movie.

The deep limitless backgrounds, as well as the thrilling objects being hurled towards the audience, both depend on the blur to work. When taking my glasses off from time to time, I not only noticed how bright the picture was to account for the tinted lenses, but the blur was equally impressive. Background figures and objects are where you’ll usually notice most of that blur, with subtle shades that creep in on whatever factor is taking center stage

There is a lot of running, fighting, and spell-casting in Doctor Strange in the Multiverse of Madness. Better still, Sam Raimi’s visually frenetic camera work, best known for being present in the Evil Dead movies, is very much on display here as well. In the wrong hands, mixing those two worlds would be a recipe for dizziness and poor audience health. For the last time in this 3D review, I’ll say it clearly and bluntly: this film is not in the wrong hands.

Visual panache is allowed to coexist with being able to clearly watch this Doctor Strange sequel do its thing. I still remember noticing the visual wonk of 3D for the first time when seeing avengers in this format, and always feeling certain moments uncomfortably stick out. That’s not the case with Multiverse of Madness, which is as comfortable in presenting itself in 3D as it is to watch in such a format. This movie literally hits the ground running, and it never loses step in quality.

It’s been a while since I’ve been able to grant a movie a perfect score, especially an entry in the MCU. Doctor Strange in the Multiverse of Madness is a rare exception, and I would even go as far as to say it’s a 3D must-see! I really hope that Kevin Feige’s comments on carefully crafting conversions like this stick with all of the teams that approach future Marvel movies.

With the format undergoing somewhat of a shrinking footprint, and the MCU being one of the few remaining consistent practitioners of this concept, the 3D world could use a rebound. Continuing to release conversions like Doctor Strange 2’s exemplary work is one of the keys to that potential success, and this movie should inspire further faith in fans willing to pay for a third-dimensional thrill ride.

Of course, part of the reason this movie may have been so crisp is because of the fact that the first trailer for Avatar: The Way of Water was attached to it. Maybe that too is a sign that studios like Disney are ready to take 3D seriously and usher in a new age of quality work. For now, I’m satisfied with Doctor Strange in the Multiverse of Madness being a 3D delight, and I look forward to trying to catch it in IMAX 3D so I can see if it’s more immersive in that specific format.