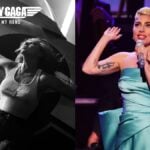 “Hold my hand. Everything will be OK,” Gaga sings after an opening segment of a plane (with LG initialed on the side) flying through the sky, cutting to the singer who wears aviator shades in a black-and-white shot.

Tom Cruise works on a plane as Gaga sings “I see that you’re hurting. Why’d you take so long?” followed by the 1986 sequence of Goose’s death with the lyrics “To tell me you need me, I see that you’re bleeding. You don’t need to show me again.”

The camera pans to photos of Goose that decorate Maverick’s work station. The video alternates between shots of Gaga herself singing beneath the fighter pilot training plane, rocking out on her piano in an open road setting and shots from the original “Top Gun” film.

Emotional shots from the upcoming sequel fill out the second half of the video from Cruise in tears, at a funeral, in the pilot’s seat and shots of Jennifer Connelly, Miles Teller, Jon Hamm and Glenn Powell.

At the climax of the song, Gaga stands on top of her piano as a plane cuts by, causing her beige dress to billow in the wind. The sun sets at the end of the video as Gaga holds her hand up to the sky from her piano bench, the plane flying off into the distance. 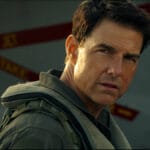 “Top Gun: Maverick” soars into theaters May 27, 2022. So far the film has been met with rave reviews.