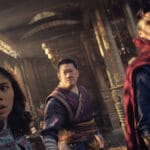 “Doctor Strange in the Multiverse of Madness” goes to some odd places in the course of its runtime, ping-ponging beyond the MCU to places beyond.

But it never stops in a game show universe.

Thankfully, we corrected that. We asked the film’s stars Benedict Cumberbatch, Rachel McAdams, Benedict Wong and Xochitl Gomez to play a Strange Quiz – a trivia game where every answer has the word “Strange” in it.

Watch the video above to see which actor got the most questions right, why the actors were so delighted to play a quiz game, and which performer wanted to keep going even though our time was up.

Directed by Sam Raimi and written by Michael Waldron, “Doctor Strange in the Multiverse of Madness” follows the former Sorcerer Supreme Doctor Strange (Cumberbatch), as he teams up with a young interloper from another world, America Chavez (Gomez), to stop a threat that could destroy not only our own world but there the worlds across the multiverse. Elizabeth Olsen also stars as Wanda Maximoff aka the Scarlet Witch, as the film twists and turns through various different universes, offering looks at alternate versions of these beloved MCU characters.

“Doctor Strange in the Multiverse of Madness” is now playing in theaters everywhere.