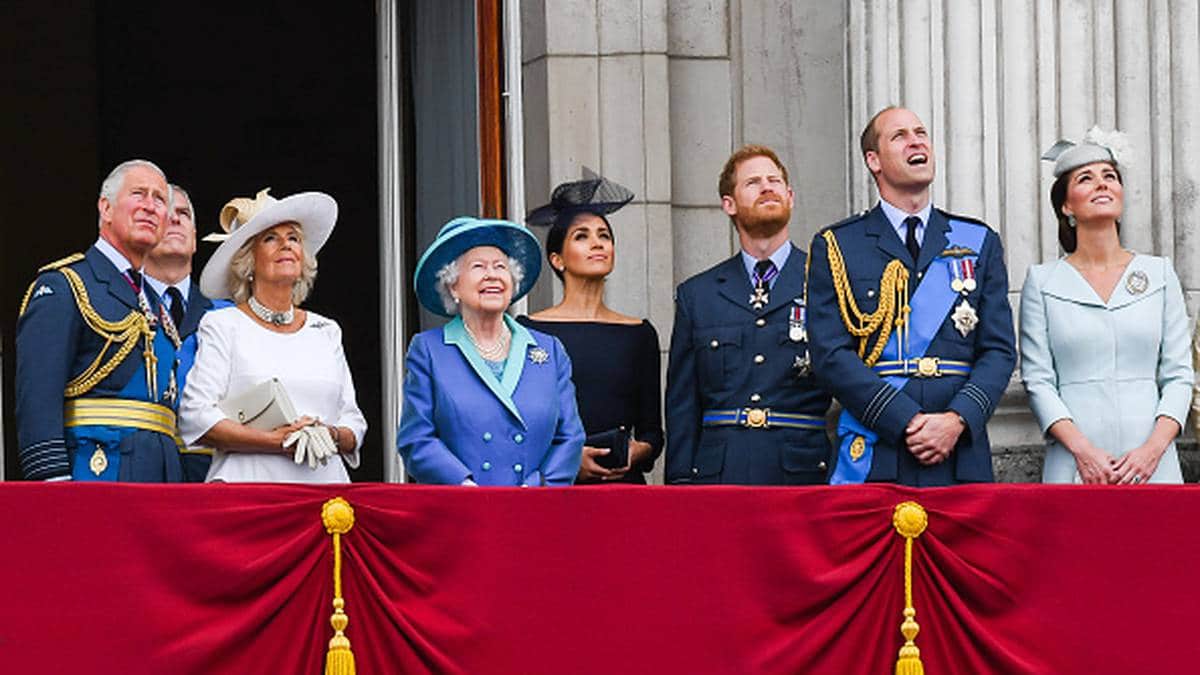 The Duke and Duchess of Sussex and Prince Andrew will not join Queen Elizabeth on the Buckingham Palace balcony at Trooping the Colour. Video/AP

Let’s blame Queen Victoria shall we? Because there are certainly changes to the royal MO that she ushered in and which are still lurking around today.

It was Victoria who started the custom of releasing photos of her kids to the press; we can blame her for the UK’s legacy of violent colonization in parts of Africa and India; and as the grandmother of Europe, for the spread of a rare form of haemophilia though the royal houses on the continent.

Today’s Palace pickle involves the family’s upcoming Buckingham Palace balcony appearance, a practice Victoria started in 1851 during celebrations for the Great Exhibition when she stepped out to do a spot of waving to the vast assembled crowd below.

In less than a month, our current Queen will mark her Platinum Jubilee with a four-day public holiday and national knees-up. It’ll all kick off with Trooping the Color and the now-set-in-stone tradition of the royal family appearing after the ceremony on Buckingham Palace’s balcony.

But early on Saturday morning, news broke that Her Majesty had gotten her big red pen out and had slashed the guest list for this iconic moment, doing away with not only all those various chinless Kents, Gloucesters and lesser-known Windsors who clog the pages of Tatler, but several very big names.

Most notably banned? Harry and Meghan, Duke and Duchess of Sussex and Prince Andrew.

In an unexpected statement the palace said only those Windsors “currently undertaking official public duties” would be allowed on to the balcony this year, with a vastly reduced number of invitees allowed to participate.

Gone are not only the Sussexes and the Duke of York but their daughters, Princesses Beatrice and Eugenie and their families. Princess Anne’s son Peter Phillips and daughter Zara Tindall and their husbands and children are also off the list. So too have the Queen’s niece and nephew, the Earl of Snowdon and Lady Sarah Chatto gotten the chop.

It’s comforting to know, though, that nothing has dimmed the renegade Sussexes’ flair for the dramatic. After having spent months refusing to confirm if they would return to the UK for his grandmother’s big event, a scant 17 minutes after the Palace’s announcement landed, a spokeswoman for the couple declared they “are excited and honored to attend the Queen’s Platinum Jubilee celebrations” and will be bringing their kids along too.

According to the Telegraph, the Duke and Duchess’ team had been told by the Palace about the balcony decree prior to it being made public and their 11th hour RSVP “is understood to have been a last-minute decision”. The news that they planned on being a part of the Jubilee also took “some at the Palace” by surprise, it was also reported.

What is truly gobsmacking here isn’t that Harry and Meghan will be whisking their 3-year-old son Archie and nearly 1-year-old daughter Lilibet back to Blighty but that they are doing so after somewhat humiliatingly being forced to accept second- tier status.

In the wake of the Palace’s balcony decree, it would have not been a surprise if the Sussexes had spun some line about security fears or Harry’s polo schedule or Archie having his first mummy-and-me Reiki session meaning that they could not make it back – but gosh darn did they send Her Majesty their best! (Who knows, maybe there might even be a gluten-free, organic muffin basket winging its way to Windsor Castle right now!)

But no, despite being so obviously demoted to understudy roles, Harry and Meghan will be in London in only a few time, making their first weeks public appearance back in Britain since their razzle-dazzle farewell tour of March 2020.

Even with the balcony moment nixed, there will be other opportunities for the Sussexes to appear with the Queen and amid the not-so-warm bosom of his family. There will be a service of thanksgiving at St Paul’s on Friday, June 3 and then on the Saturday, the 96-year-old will be attending the Derby at Epsom Downs. The Big Jubilee Lunch and street parties the length and breadth of the UK, are on the schedule for Sunday the 5th.

But make no mistake here: This is Harry and Meghan being forced to accept a downgrade while the world watches on. They might technically be private citizens but he is still the son and brother of the next two kings; lumping him in the same basket as some Kent cousin, twice-removed, must hurt.

That they are going to the Jubilee given all this is a stunning concession from the duo. According to Finding Freedom, the hagiographic biography of the Sussex years, the couple’s decision to pull the ripcord on royalty came after they were forced to accept the Cambridges’ plans and projects permanently getting higher billing, with the lower-ranked Sussexes forced to fall in line.

Yet only two years later, they are willing to sign on as supporting guest stars – it’s nothing short of astounding.

For the Palace, Saturday’s balcony ruling is a real line in the sand.

While Trooping the Color is the monarch’s official birthday celebration, it is technically a family event meaning that usually we get the dozens and dozens of lesser members of the Queen’s vast extended family crammed out on the balcony.

In 2019, the last time the full color was trooped, there were 39 of the ’em out there. Who, aside from the most obsessive of royal watchers, can tell me how Zenouska Mowatt, Thomas Kingston and Lyla Gilman are related to Her Majesty de ella?

While there have been a number of occasions during past Jubilees when the chosen assortment of family members tapped to appear on the balcony has chopped and changed, this will be the very first Trooping the Color to bar relatives in favor of only the frontline Windsors.

Having established this precedent, will the Palace be able to revert to the traditional format in the years to come? It seems unlikely.

The head scratching question in all of this is, why have Harry and Meghan so readily agreed to fly 11 hours with two very small children for an event at which they have been denied the opportunity to be a part of the history-making, centrestage moment ?

Have they decided they want to mend a few bridges? Do they so badly need the PR boost that they are willing to swallow their pride? Or is Harry just that desperate for a nice warm pint of bad lager with a lot of old Etonians named Hugo?

A generous read of this situation would be that they hold Her Majesty with such reverence and respect they could not countenance not being there and, no matter their lowly billing, wanted to show their support.

A more cynical mind might argue that this is hypocritical and par for the course for the heat-seeking, attention-magnet couple, who despite having let fly with incredibly damaging accusations of Palace racism and cruelty, are now willing to make nice just as the biggest royal PR event in a decade rolls around.

There is the pesky fact that having failed to gain much ground in the US as aspiring political, entertainment and philanthropic heavyweights, a fresh injection of that royal stardust would not go astray. Nor would it hurt relations with their streaming paymasters Netflix who recently canned one of the two shows they had announced as part of their AUS$140 million deal.

Still, in a matter of weeks, Harry, Meghan, Archie and Lili will be back in Britain and though the Sussexes have been relegated to the bench, can anything really dim the megawatt, obsessive coverage that their return will trigger?

The Queen might be celebrating seven decades on the throne, but if there is one thing that Harry and Meghan know, it is second, third or fourth acts.

• Daniela Elser is a royal expert and a writer with more than 15 years’ experience working with a number of Australia’s leading media titles.