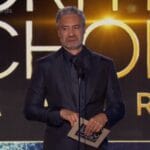 “Love and Thunder,” which will premiere in theaters July 8, sees Thor (Chris Hemsworth) enlist the help of Valkyrie (Tessa Thompson), rock monster Korg (voiced by Waititi) and his ex-girlfriend Jane wage a battle against Gorr the God Butcher (Christian Bale). However, he’ll be shocked to discover Jane’s transformation from her into the Mighty Thor, worthy to wield the precious hammer Mjolnir.

“It’s been about eight years,” Waititi told empiremagazine of Portman’s last appearance in 2013’s “Thor: The Dark World.” “She’s had a whole other life, and then the love of your life comes back on the scene, and she is now dressed like you. It’s a real mind—for Thor.”

Opening up about how the storyline came to be, the “Jojo Rabbit” filmmaker revealed that he drew on Jason Aaron’s “The Mighty Thor” comics from 2015, which first explored Jane’s superpowers.

“I was writing and it was like, ‘Wouldn’t it be kind of cool to bring Jane back into the storyline?’ he said, adding, “You don’t want Natalie coming back and playing that same character who’s walking around with science equipment, you know, while Thor’s flying around, she’s left on Earth, tapping her foot going, ‘When’s he going to be back?’ That’s boring. You want her to be part of the adventure.”

Waititi added that Portman’s comedic chops mesh well with his off-beat approach to the comic-book material, which is sure to color the new MCU movie. “She’s kind of goofy and has got a great sense of humor, and I don’t think that was exploited enough in the first films,” he said. 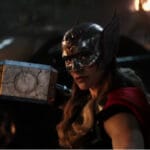