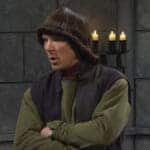 “SNL” cast member Kate McKinnon made her debut as Supreme Court justice Amy Coney Barrett on Saturday’s Weekend Update, taking direct aim at Barrett’s stance on abortion and fulfilling a piece of “SNL” fan-casting that’s been hoped for since Barrett was nominated to the Supreme Court.

“I’m guessing you’re pretty happy with the draft,” Weekend Update anchor Colin Jost said to McKinnon as Barrett in reference to the leaked draft opinion that could overturn Roe v. Wade. “I don’t know what would make you think that other than everything I’ve ever said,” she replied.

The majority of the Barrett character’s appearance took aim at the real-life counterpart’s comments on abortion related to safe-haven laws. In 2021, Barrett asked during oral arguments why safe-haven laws would not ease the burden of parenthood from those seeking abortion. Safe-haven laws make it legal for parents or guardians to voluntarily give up a newborn baby.

“I don’t understand why you need abortion because you can leave a baby anywhere in the United States. So what’s the big deal, just plop it?” McKinnon as Barrett said.

The appearance also took on Barrett’s position of privilege as it relates to her thoughts on abortion. “I have seven children and a job and I make it work, so why every single other woman can’t do the same is beyond me. Unless I’m like missing something about class in America.”

The lack of stigma against unwed mothers was brought up as another argument against abortion. “If you get pregnant and you’re not married, you don’t have to go to a spooky convent anymore,” McKinnon said. “You just give a baby to a panther, ‘Jungle Book’ it and that’s your nine.”

And one last zinger: “What is more traumatic? Safely ending an early pregnancy or giving full birth to a baby you can never see again because you put it on a Ferris wheel?”

Watch the appearance in the video above. 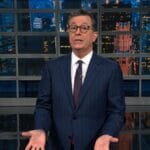