Miguel Ángel Muñoz: “Being Julio Iglesias is going to be a gift” 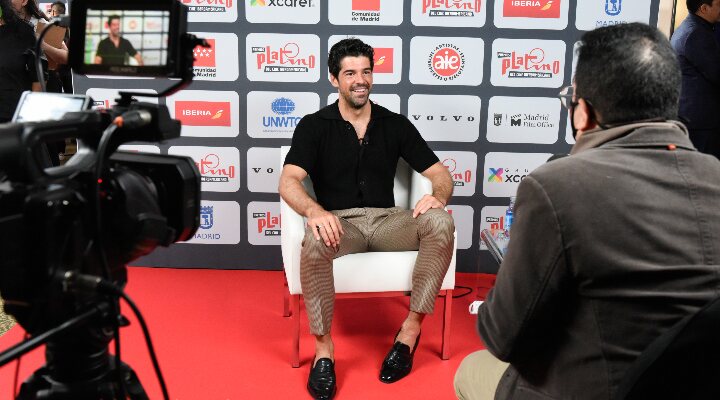 On May 1, the ninth edition of the Platino Awards took place, which crowned ‘The good boss’ as the best Ibero-American film and ‘The kingdom’ as the best Ibero-American fiction series. Presented by Miguel Angel Munoz and Lali Esposito, the actor also spoke about his future projectshighlighting the ‘Bosé’ series, the fiction that Paramount+ prepares about the life of the singer Miguel Bosé and in which the ‘Presumed Guilty’ actor will embody nothing more and nothing less than Julio Iglesias. “I’m very excited”confess.

Muñoz was part of the extensive press junket that took place on April 30which was held after the extensive press conference in which tribute was paid to this year’s Platinum of Honor, the actress Carmen Maura. The interpreter acted as host at a gala in which he was also eligible for a prize, since his documentary ‘100 days with Tata’ It was a Platinum nominee for Best Nonfiction Feature Film.

“I am very excited, I feel very happy, but also very nervous. The responsibility of presenting such an important international gala makes you nervous, but, if you are also nominated for one of the awards, it has made me even more anxious. But the emotion is bigger, Muñoz shared in an interview granted to eCartelera during the junket press held at the Intercontinental Hotel.

Muñoz faces a great interpretive challenge this year, since is shooting the series ‘Bosé’ for Paramount+, in which he will play Julio Iglesias, considered one of the great international symbols of Spanish music. “I confess that more than fear, I am excited because I am a great admirer of Julio, he is the most international and important artist that Spanish music has given, especially abroad. His life, moreover, is so exciting. Playing someone so iconic is very exciting, it is a gift”declared the artist.

“He’s so funny. On the other hand, He was at his peak, at 38 years old, at the height of his success but, in addition, with the ability to sponsor other musical talents, as was the case with Miguel Bosé“continues the actor, who points out that, although he did not contact the singer for the series, he is “wanting to meet him”. “We met when I was singing, about 15 years ago, at a concert organized by the Alzheimer’s Foundation led by Queen Sofía on the Cover of Leganés, in which many veteran artists and one young one, who was me, were present. We took a picture there, but I really want to meet him and tell him that I have interpreted him“he stated.

In addition to becoming Julio Iglesias, Muñoz has several projects pending release, such as his break into Hollywoodwhere he has shot in English in ‘Daddy Daughter Trip’, directed by and starring Rob Schneider, or ‘What About Love’, directed by Klaus Menzel; in addition to the pending premiere of ‘In another place’, directed by Jesús del Cerro. “The one that is going to arrive this May, on the 27th, is the film by Jesús del Cerro, in which I share the leading role with Pablo Puyol and Esmeralda Pimentel. But yes, the film that I shot with Rob Schneider will also arrive, which I shot in Arizona that I really want the public to see.”he concluded.